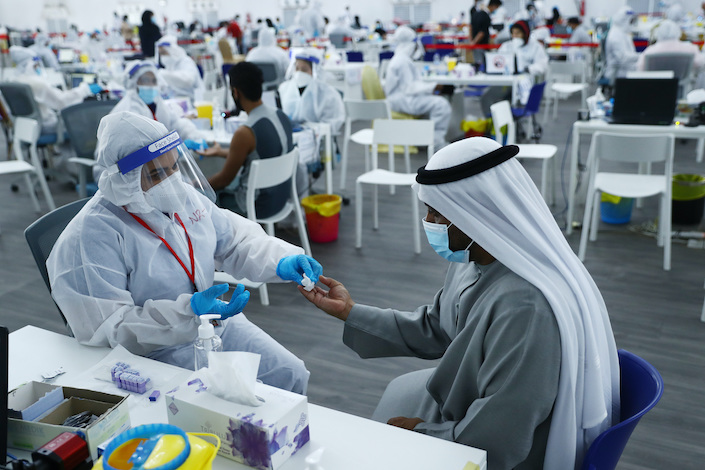 A testing center at the Dubai-Abu Dhabi border on Aug. 10 in Abu Dhabi, United Arab Emirates.

Imported Covid-19 cases rebounded in China as Chinese workers returning from the Middle East and Central Asian countries tested positive for the coronavirus.

Between Aug. 9 and 11, 82 new imported cases were confirmed in China, among them 30 from the United Arab Emirates and 15 from Kazakhstan, according to the National Health Commission (NHC).

Most of the Chinese workers from the United Arab Emirates arrived Friday at Shanghai on a Sri Lankan Airlines flight. The infected patients from Kazakhstan landed at the northwestern city Xi’an and the eastern city Jinan over the weekend on two charter Air China flights arranged by China’s Embassy in the Central Asian country.

More than 600 Chinese citizens working or studying in Kazakhstan took the charter flights. The Chinese Embassy said it arranged a second batch of charter flights for returning citizens.

Having largely brought its domestic outbreak under control, China has turned a major part of its disease prevention and control effort to overseas travelers who have the potential to seed new outbreaks in the country.

Coronavirus is raging in some of the most populous nations in the Middle East and Central Asia, with Kazakhstan hit the hardest. Last Friday, Kazakhstan reported 907 new confirmed cases, pushing its total of infections over 100,000. The UAE reported 225 new cases Sunday, with total cases of more than 60,000.

The mechanism was put in place in June to reward airlines that remained on guard for Covid-19 infections while punishing those that were laxer. Any airline that operated a flight with five or more passengers testing positive would be suspended for a week. Airlines with 10 or more passengers testing positive on a single flight would be suspended four weeks.

As a key partner in China’s Belt and Road Initiative, Kazakhstan is home to many projects backed by Chinese companies in sectors such as oil exploration, nonferrous metals mining and infrastructure construction. A Chinese worker at an oil company told Caixin that his family took the charter flight to China, and he remains at work in Kazakhstan.

Yan Jia and about a dozen of his colleagues working on a project for the Expo 2020 Dubai, have been stranded in Dubai since the expo was postponed until next year from its originally scheduled opening in October. Yan said the suspension of UAE and Sri Lankan airlines flights made it even harder for Chinese people to get home.