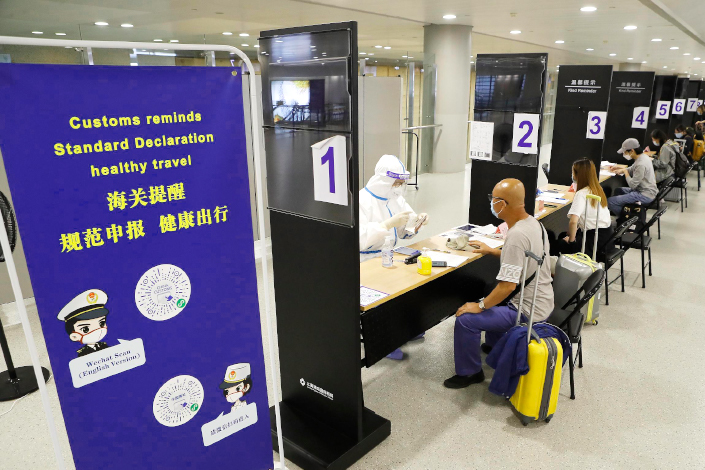 Shanghai recorded 18 new Covid-19 infections from abroad on Sunday, a high not seen for more than four months, as the city assumes a role as China’s major gateway for international flights that are slowly resuming.

The new infections were all Chinese citizens aboard two flights from the United Arab Emirates, according to the city’s local health authority. Of the 18, three arrived aboard an Air China flight on Aug. 6. The remaining 15 came on a SriLankan Airlines flight that originated in the UAE on Aug. 7 and transited through Sri Lanka before continuing to Shanghai.

The infected have been transferred to designated facilities for treatment. Another 237 people who had close contact with them aboard the flights are under quarantine, in line with customary procedure for all inbound passengers.

The case marks the city’s highest number of imported infections on a single day since April 11, when a record 51 infected people arrived aboard an Aeroflot flight.

Having largely brought its domestic outbreak under control, China has turned a major part of its disease prevention and control effort to overseas travelers who have the potential to seed new outbreaks in the country. Such arrivals slowed to a crawl as the big majority of international flights were canceled at the height of China’s outbreak in March.

The nation is now slowly starting to resume some of those flights, both by domestic and international carriers. But it is also trying to remain vigilant about bringing new cases into the country, including its rollout of a “circuit breaker” mechanism in June designed to reward airlines that remained on guard while punishing ones that were more lax.

One provision of that circuit breaker will now be applied to the SriLankan Airlines route, which will be suspended for four weeks. Under the system any international route is subject to such a suspension if 10 or more passengers on a single flight tested positive for the virus.

The four-month high in daily new imported cases comes amid a broader increase in such new cases coming into China’s commercial capital. The city saw 29 such cases in the four days from Aug. 6 to Aug. 9, including 21 from the UAE and six from the Philippines. To date Shanghai has recorded 444 imported cases, outpacing the city’s 342 domestically-transmitted cases reported since the outbreak began.

The city already takes a wide range of actions to prevent such imported cases from getting into the community, including on-the-spot testing on arrival, and requiring health declarations and temperature checks in addition to the standard 14-day quarantine.

Shanghai has become China’s biggest gateway for travelers from abroad as the country gradually lets in more flights following sharp reductions at the height of the virus. From July 1 through Aug. 6, the city’s Pudong International Airport received 209 international flights, averaging five to six per day. Beijing, which was previously the country’s other top destination for international flights, curtailed such flights back in May, when it rolled out a policy requiring all inbound flights to the city to first stop at other domestic airports first.

Shanghai has also assembled a team to study methods that can be used at places of origins to prevent infected people from boarding flights to the city, including pre-flight screenings and inspections of certificates showing a person has tested negative for the disease. The city has also issued guidelines on the matter emphasizing that foreign employers have the main responsibility for the management of their workers on health-related issues.