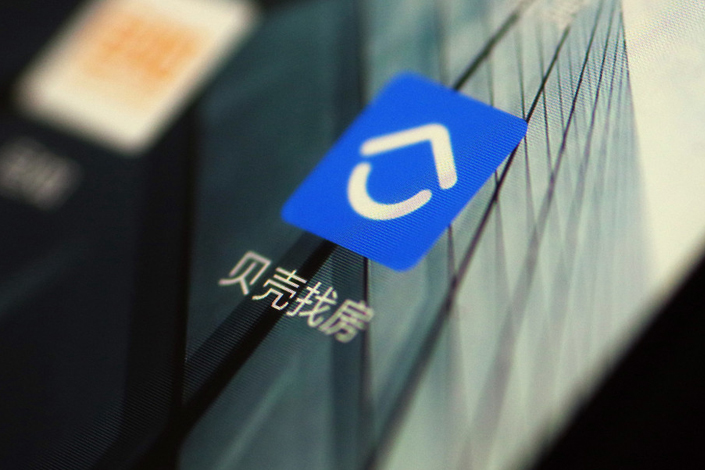 Shares of KE Holdings Inc., a money-losing real estate services provider backed by tech giants Tencent and SoftBank, soared nearly 90% on their trading debut in New York, in the biggest IPO by a Chinese company on Wall Street in more than two years.

The company, which also goes by the name Beike, priced its American depositary shares (ADS) at $20 apiece, raising $2.12 billion in the process, it said in an announcement. The stock then jumped when Thursday trade began, closing at $37.44, just below its high during the day. The final fundraising target was roughly double the $1 billion that KE said it hoped to raise in its original prospectus filed July 24, indicating strong investor demand.

The offering was the largest by a Chinese company in the U.S. since online video company iQiyi Inc. raised $2.4 billion in March 2018, according to data compiled by Bloomberg. Goldman Sachs, Morgan Stanley, JPMorgan and CICC were among the deal’s main bookrunners.

The company is better known in China by its name of Lianjia, which is one of the country’s top real estate brokers with an extensive chain of brick-and-mortar outlets in addition to its online presence. Founded in 2001, it is one of the older players in a Chinese private real estate market that only dates back to the mid-1990s.

Despite its age and status as a major player in China’s buoyant real estate market, the company has lost money for the last three years. Its net loss for 2019 ballooned by more than a factor of five to 2.2 billion yuan ($317 million). The big losses continued in this year’s first quarter, when China was at the height of its Covid-19 outbreak, with the company reporting a 1.2 billion yuan loss for the three-month period.

KE’s revenue has been steadier, growing about 22% to 24.6 billion yuan in 2019. But its revenue fell by nearly half year-on-year in the first quarter of 2020 to about 3.4 billion yuan as many people remained homebound and property transactions plunged during the pandemic.

The listing’s strong reception comes at a time when the U.S. is threatening to delist any New York-traded Chinese companies that do not comply with U.S. accounting practices. Most notably, the U.S. securities regulator wants better access to accounting records of U.S.-listed Chinese firms to assist in its investigations of potential fraud. Such records are now largely out of its grasp due to sovereignty issues, though the regulator has held talks with its Chinese counterpart to improve cooperation.

In one of the latest twists of that saga, U.S. regulators released a report earlier this week disclosing details of recent disagreements with their Chinese counterparts over proposed working plans for cross-border cooperation on audit inspection, amid rising geopolitical tensions between the world’s two largest economies.