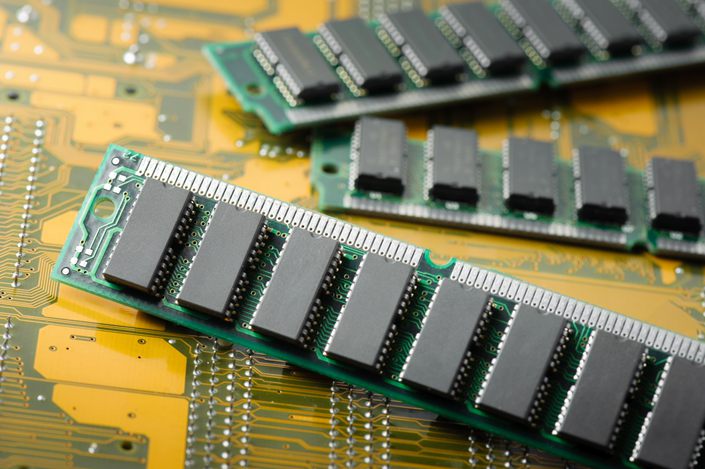 China made a major breakthrough in its quest to become more self-reliant in the semiconductor industry when ChangXin’s DRAM chips reached the market. Photo: IC Photo

The company began mass producing the chips the previous September. But the May revelation finally confirmed that China could compete with global giants like Samsung, Hynix and Micron — the world’s three largest DRAM makers that collectively control 90% of the market.

The news was hailed as a significant development for both ChangXin and China’s semiconductor industry, which has suddenly gone into overdrive to become more self-sufficient in the face of increasingly stringent technology export restrictions from the West, led by a campaign from the U.S.

As that happens, China is pouring billions of dollars into building its own semiconductor sector producing both memory and logic chips, the two biggest categories of high-tech chips. Of those two, memory is the simpler and thus perhaps the easier one for China to enter and quickly gain market share.

Memory chips accounted for $106 billion of the broader $412 billion semiconductor market in 2019, according to the Semiconductor Industry Association. While China is the world’s largest buyer of semiconductors, its domestic companies hold negligible share in terms of actual chip making.

That made Changxin an instant celebrity among people aiming to raise China’s profile in the sector.

As tensions between China and the U.S. continue to grow by the day, many are predicting a technology “cold war” that could leave ChangXin as one of the Chinese companies in pole position to benefit most. But more than government support is needed to make products the market wants, and the company needs to prove its chips are dependable and competitive with those already out there, industry experts said.

Based in the Anhui capital of Hefei, ChangXin was established in May 2016 as a project co-led by the local state-owned Hefei Industrial Investment Fund (HIIF) and GigaDevice Semiconductor Beijing Inc., a Chinese designer of another type of memory called flash.

HIIF provided most of the funding to kick off the project, designed to ultimately receive up to $8 billion in investment, with GigaDevice also giving an unspecified amount.

Wang left after two years and was succeeded by Zhu Yiming, who resigned as president of GigaDevice to join Changxin in 2018.

At the time of Changxin’s formation, China had little DRAM production experience or self-developed DRAM-related intellectual property (IP). To get that, Changxin partnered with Qimonda, the once-leading German DRAM maker that was formerly part of Infineon Technologies. Qimonda filed for bankruptcy in 2009, but retained a large volume of DRAM-related IP that ChangXin could tap.

Through the Qimonda tie-up, ChangXin secured more than 10 million DRAM-related technical documents and an additional related database with 2.8 terabytes of data, laying the foundation for its own DRAM efforts, Zhu said at an industry forum last September.

Using that base, ChangXin started producing its first DRAM chips last September. It could produce 20,000 wafers per month by the end of last year, and was scheduled to double its capacity by the middle of this year, according to the company.

With monthly capacity of 40,000 wafers, ChangXin will account for about 4% of total DRAM capacity worldwide this year, according to Taiwan-based consultancy TrendForce.

ChangXin began delivering its products to clients late last year, Caixin has learned. One of those is Shenzhen Longsys Electronics Co. Ltd., a memory module maker that announced in May that ChangXin’s chips had passed its validation testing and would be included in three of its storage products.

Such users are the easiest to attract for a young company like ChangXin because their technology needs are relatively low, said a person with long experience in the semiconductor industry.

Next, ChangXin will need to target companies that make finished consumer electronics like smartphones and notebooks. Such a breakthrough will be far more difficult and time consuming since such buyers typically have much stricter and lengthy validation processes to ensure product quality.

A source close to ChangXin’s management told Caixin that the company had already begun talks with such companies. But in those cases, ChangXin won’t be able to rely on finding politically-motivated customers that simply want to help Beijing meet its technology objectives.

“Companies would not choose ChangXin’s products simply because it is a domestic brand,” said a source close to the company’s top management. Their decision on what vendors’ products to use will be based on the quality of that product, added the source.

One place where ChangXin should have an edge over global rivals is its relatively lower prices. But big names often use their deep pockets to lower their own prices and drive newcomers out of the market, industry people said.

ChangXin currently uses 19-nanometer process technology for chip production, trailing that of its rivals of Samsung, SK Hynix and Micron, which already use more advanced 14-nanometer technology. The smaller the circuitry, the more memory can be squeezed into a chip.

While ChangXin may enjoy lower costs in general, its relative lack of experience could affect its yield rates – the number of chips that are usable out of any given batch after discarding ones with problems. The older companies are likely to enjoy higher yield rates, potentially wiping out any advantages ChangXin would gain from its lower cost structures.

Though tensions with the U.S. have drawn attention to China’s call for high-tech self-sufficiency in the last two years, the country’s push to develop its own semiconductor sector dates back to 2014, when Beijing rolled out its first national development guidelines for the industry.

ChangXin was one of many companies founded around that time, hoping to take advantage of generous central and local government support

While ChangXin has been one of the few success stories so far, many others have made far less progress. One of those, another former DRAM aspirant called Fujian Jinhua, is on life-support after losing a legal battle in which it was sued by Micron in 2017 for stealing trade secrets.

ChangXin managed to avoid a similar fate by partnering with a well-known name like Qimonda. More broadly, the company has been careful in dealing with IP issues, said a source familiar with ChangXin’s operations. For example, new recruits from rival companies are told not to bring any documents from their previous employers with them, the source said.