By Yuan Ruiyang, Flynn Murphy and An Limin 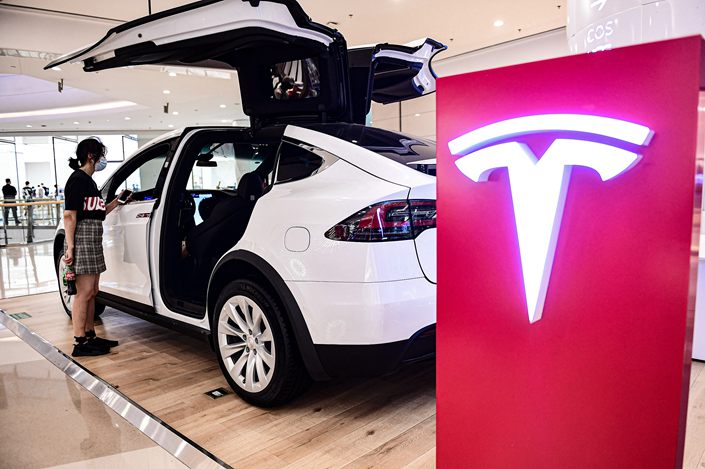 U.S. electric-vehicle maker Tesla Inc. is refusing to deliver Model 3 vehicles to buyers on Chinese group buying platform Pinduoduo Inc. which has been offering the cars at cheaper prices via group buying deals.

While both companies trumpeted their commitment to protecting buyers, some say discount retailer Pinduoduo is trying to increase its prestige by selling the cars, while Tesla is seeking to guard against its high prices being undercut by promotions.

“We are disappointed that Tesla has made it difficult for some of their fans to get their dream car,” a spokesperson for Pinduoduo told Caixin on Monday. “We appreciate the trust that our users put in our platform and will do everything we can (to) protect their rights.”

“We put our consumers’ interests first and stand by them.”

Tesla said Pinduoduo’s promotions constitute “reselling,” and gave it the right to terminate the sales contracts. In a statement to Caixin on Tuesday, the carmaker said it would support any customers that were “misled” by Pinduoduo’s group buying promotion and will do “whatever is possible to provide consumers with the legal assistance they need.”

It added the company would compensate impacted buyers for the “loss of time and energy” if they purchase their cars through Tesla’s own channel but did not provide any details.

Tesla also defended its singular focus on direct sales, saying it was “truly in the best interests of consumers” who would pay the same price wherever they bought their Tesla and would not fall victim to “information asymmetry” or need to travel to other provinces to buy cheaper cars.

Tesla said the Pinduoduo website was using customers’ information entered into the site to place orders directly with Tesla, after they paid Pinduoduo, meaning the car company did not have a contractual relationship with the end customer.

But Chen Wenming, head of Zhejiang Xiaode Law Firm, said in his opinion the arrangement should not be considered a “resale” because Pinduoduo was simply acting as an agent for the actual buyers. He said Tesla would need to provide further evidence that Pinduoduo was acting as a reseller.

It is not the first time the two Nasdaq-listed companies have clashed. In July, Pinduoduo and Yimaiche Automobile launched a group buying activity that sold five Tesla Model 3 cars on sale for 40,000 yuan less than their retail price of 291,800 yuan.

Tesla attacked the promotion on Weibo, saying it had not authorized it and would not bear any responsibility if disputes arise from the sale.

While Tesla keeps its sales figures for China secret, figures released Monday by the China Automotive Information Net showed domestic registrations of China-built Tesla vehicles dropped 24% in July to 11,456 (link in Chinese). The world’s most valuable carmaker has been facing competition from local upstarts like Nio Inc. and traditional carmakers BMW AG and Volkswagen.

Pinduoduo has its own issues. With the company’s growth slowing, investors have become concerned about its relatively low average spending per user, which still trails that of rivals Alibaba and JD.com.

While third party sellers do offer luxury goods from top brands on Pinduoduo, many brands have publicly shunned the discount retailer which has struggled to shake off a reputation for selling low quality and knock-off goods.