Cui Tiankai: China Is Not Waiting on the U.S. Presidential Election 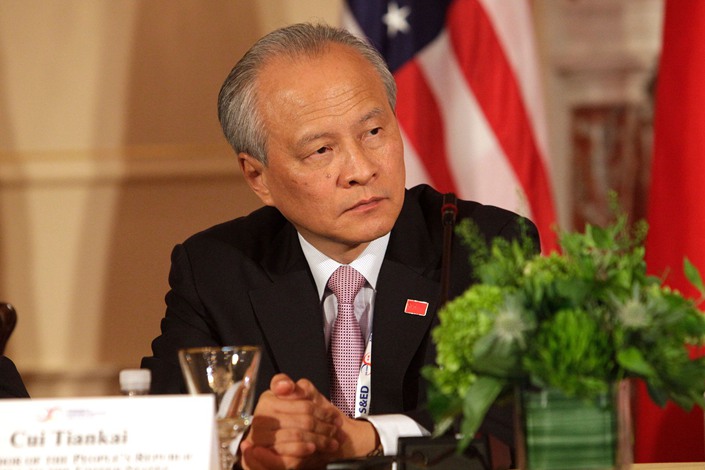 Cui Tiankai is China’s ambassador to the United States. This article, edited for length and clarity, was a speech the ambassador delivered at a webinar with Brookings Institution last week.

Today, the China-U.S. relationship is going in the wrong direction and has been described by some as in free fall. Over the years, it has never been short of problems and difficulties, but alarmingly, there are attempts now to negate what has been built up so painstakingly by generations of Chinese and Americans over the decades and to deliberately push our two countries into conflict and confrontation.

All this is happening in the context of the raging pandemic and the consequently flagging global economy. Its a time when international cooperation is urgently needed, especially between major countries, and this situation is greatly hindering our cooperation. The deterioration of China-U.S. relations also undermines people’s confidence in the global economy, with serious consequences for both countries and the world.

Some people here and elsewhere are obsessed with great-power competition and strategic rivalry. But if we have a close look at the three major international crises in the 21st century, namely, the 9/11 terrorist attack, the global financial crisis and the current pandemic, they are all of a strategic nature, but not in the traditional sense of the word. None of them could be resolved with the tool box of great-power competition. The world has changed. It is natural for major countries to have differences and even competition, but this does not justify confrontation. Today, what pushes major countries to cooperate far outweighs what drives them apart. Stigmatization will not make anybody great. Ideological crusades will not solve any problem in today’s world and is doomed to fail.

Maybe some believe that driving up confrontation could slow down and contain China’s development, and even bring about regime change. This is nothing but wishful thinking. History has proved time and time again that external pressure will only lead to greater unity amid the Chinese people, stronger cohesion of Chinese society and better resilience of the Chinese economy.

Some people like the term “cold war” so much, maybe bolstered by their victory in the Cold War. But they should not forget the price the world paid for it in a span of some four decades, not to mention the bitter costs the United States and other countries paid in two hot wars, in Korea and Vietnam. We should not allow history to repeat itself. If the negative trend of China-U.S. relations is allowed to continue, China might have to face more difficulties and challenges. But the initiators of the so-called “New Cold War” must weigh the costs they have to pay and the consequences for the world. For whom the bell tolls, there will be a day of reckoning.

At present, the fundamental question for the China-U.S. relationship is: as China has deeply integrated itself into the current international system, is the United States ready to accommodate China and live with a country with a different history, culture and system? It’s fair to say that, with the normalization of bilateral relations and the establishment of diplomatic ties, China and the United States already made their choice, i.e. we need to live in peace, strive for co-evolution, properly manage our differences, expand cooperation, and build a comprehensive, stable and constructive relationship. I hope people will not try to negate all this and let the relationship go down a very dangerous path.

The “post-pandemic world” may provide a good opportunity for China and the United States to cooperate. It will be a very different world. Technological progress and other factors will lead to restructuring of the global economy and the supply chain. There will even be some changes in the guiding economic philosophy, and greater priority will be given to social issues like public health and contagious diseases. A new situation presses for better international macroeconomic policy coordination and reform of the global governance system, especially in social sectors such as public health. Facing this major task and severe challenge, China and United States should make the right choice, on the basis of mutual understanding and respect, play a positive role for a “post-pandemic” world order and global governance system, and build a more forward-looking, stronger and more stable relationship between our two great countries.

Maybe some people believe that China is just waiting for the result of the U.S. presidential election in November. Let me make it very clear here, we are not waiting for anything, and we are never willing to waste time in waiting. Besides, American domestic dynamics are well beyond what we can predict or influence. We have no intention or interest to get involved. During his visit to China almost 50 years ago, President Richard Nixon cited Chairman Mao’s poem, “We should seize the day, seize the hour.” Today we still need to seize the day, seize the hour. We are ready to work with the current administration to search for solutions to existing problems anytime anywhere, even today or tomorrow. I just hope that they will free themselves from panic and paranoia, which are costing them their common sense in such a shocking way.

People from all walks of life in China and the United States should stay on guard against vicious attempts to push the bilateral relationship to confrontation and conflict. We should firmly resist any resurgence of McCarthyism, and expand two-way exchanges and cooperation, so as to get the China-U.S. relationship back to the right track as soon as possible.