U.S. and China Should Reboot Relationship Amid Pandemic, Ambassador Says

By Wang Zili and Han Wei 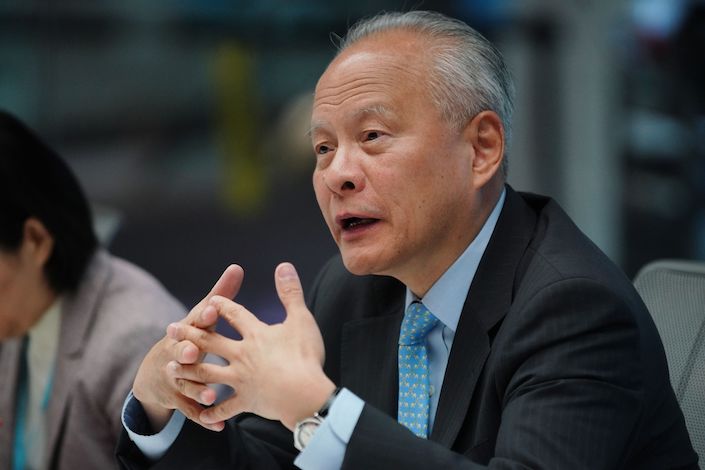 China and the United States need a “serious rethinking” of their relationship as the Covid-19 pandemic shakes up global politics and ties between the world’s two biggest economies, the Chinese ambassador to the U.S. said.

In the face of “shared vulnerability” amid the outbreak, China and the U.S. should think hard about “where our true common interests lie” and “how should we define a relationship,” Ambassador Cui Tiankai said Tuesday during a Bloomberg New Economy webcast.

“Hopefully this pandemic will teach all of us a good lesson,” he said. The relationship should “be based on a more realistic, forward-looking foundation,” the ambassador said. Cui, 67, has been China’s ambassador to the U.S. since 2013.

Chinese President Xi Jinping and U.S. President Donald Trump pledged unity and cooperation in the fight against the epidemic March 27 in their most recent phone conversation. However, tensions between the countries continued mounting as American leaders accused China of covering up the outbreak. China denied the allegations and said it shared information about the virus in a transparent and timely manner.

At the same event, former Australian Prime Minister Kevin Rudd said the U.S.-China relationship is now in “fundamental disrepair” as the machinery that previously existed through the strategic and economic dialogue has virtually been rendered redundant.

“The best we can hope for is a tactical pause in the hostilities while the strategic dimensions of the relationship continue to unravel,” Rudd said.

“I should be hoping for more than just a pause in tensions, but really a serious rethinking of the very foundations of this important relationship,” he said.

The Chinese ambassador recently raised his voice cautioning about the bilateral relationship. In an opinion piece published earlier this month in The New York Times, Cui called on the two countries to avoid blaming each other in the novel coronavirus outbreak and instead to lead international efforts fighting the pandemic. Cui, a career diplomat with a law degree, did a year of post-graduate study at Johns Hopkins University in 1986-1987, according to his embassy profile.

China always stands for dialogue and is supportive and open to all kinds of mechanisms for bilateral cooperation, Cui said Tuesday.

“Fortunately at the top level, there has been a good working relationship between the two presidents,” Cui said. “But of course we have to do more at lower levels.”

Chinese and American officials have worked closely over the past couple of years to resolve trade disputes and set up the phase one trade agreement. But there is still a need for more political dialogue and other cooperation, Cui said.

The ambassador defended China over transparency claims in the outbreak. The country informed the World Health Organization of the unknown virus Jan. 3 and communicated with the U.S. Centers for Disease Control and Prevention the next day, he said.

“We have shared everything we learned with the WHO and with the medical communities of other countries, including the U.S.,” Cui said. “I think we are doing our best to have transparency.”

“People have to see the fact that this is a new virus… we are still learning,” said Cui. “We are discovering, we're learning and at the same time we're sharing.”

Government officials, business leaders and medical professionals from the two countries have maintained close communications amid the outbreak, he said. As the epicenter shifts to the U.S., the Chinese embassy has been in almost daily contact with the U.S. trying to facilitate the flow of medical supplies from China to the U.S. China has so far supplied the United States with more than 1.4 billion facial masks, Cui said.

Cui said he is more worried that some U.S. politicians are not paying enough attention to views from scientists but are “preoccupied in their efforts for stigmatization and groundless accusation.” He said he’s concerned with the “anything-but-China” mindset.

“I think we have to really make a distinction between some of the people who are narrowly politically motivated on the one hand, and the Chinese and American people on the other hand,” Cui said in response to questions about rising online rhetoric between the two countries demonizing each other.

“I can see deep-rooted friendly sentiments between the two peoples,” Cui said. “I still trust this. And hopefully the wish of the people would eventually prevail.”

It’s a myth that China has taken advantage of the U.S. and that its development has been at the expense of the U.S., Cui said.

“If you look at the history of the past four decades or so, it's clear both countries benefited from a normalized and developing China-U.S. relationship,” the ambassador said. “If our two countries can cooperate with each other, both will benefit. If we have confrontation, both would lose.”