Lawyers Cash in on Livestreaming as Complaints Mount 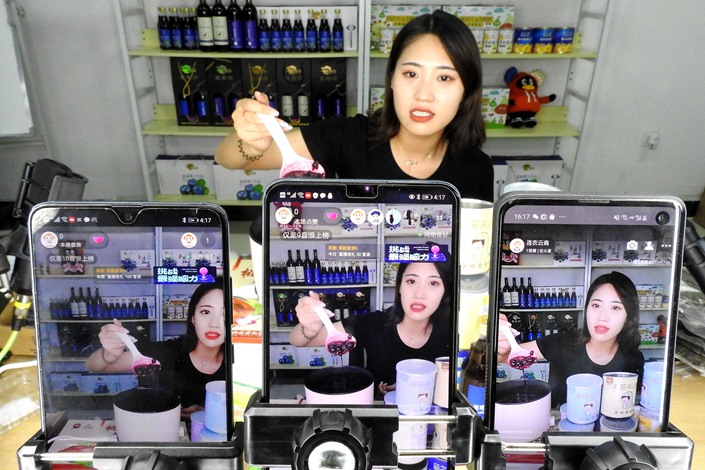 China’s vibrant livestreaming sector has spawned a parallel boom in legal disputes, as clashes occur in a complex universe populated by platform operators, millions of broadcasters who use those platforms, and even more consumers who follow such broadcasts.

Highlights of the wide array of legal clashes coming from the space were contained in a white paper released by a court in Beijing’s Chaoyang district on Thursday. Livestreaming can be broken into three basic activities: Gaming, shopping, and entertainment shows hosted by individuals who can sometimes take on celebrity status. Among those, hosted shows are easily at the center of the largest number of disputes, accounting for two-thirds of cases heard, according to the Beijing court.

Disputes can occur in many of the different parts of the intricate chain of relationships that make up the livestreaming ecosystem. The court said the cases it hears most frequently involve four major types of disputes: those between show hosts and the many brokers that have populated the industry; those involving sharing of proceeds between broadcasters and the platforms they use; those surrounding fees paid by the former to the latter; and those involving the return of money often given as gifts or other tokens of appreciation to show operators.

China is the world’s largest internet market with around 850 million users. Some 560 million of those engaged in live broadcasting through March this year, up 41% from the previous year, according to China’s internet regulator. Within the broader livestreaming category, show hosts accounted for 207 million users, while users of livestreamed games and shopping accounted for 260 million and 265 million, respectively.

The industry has given rise to a number of major platform operators, including the likes of New York-listed DouYu, Bilibili, Huya, which are all worth billions of dollars.

Read more
In Depth: How Livestreaming Became a Force in Chinese E-Commerce

Disputes between platform operators and broadcasters who use the platforms are the biggest single group in the bigger universe of legal complaints, according to the Beijing court. Within that group, cases involving broadcasters who jump to other platforms in violation of exclusivity agreements are the most common. Such platform-jumping has become common in the industry, as rampant competition leads operators to poach the most popular personalities and shows from their rivals.

Another major area of disputes involves gifts that are often given by consumers of livestreaming services to broadcasters, such as their favorite show hosts, as a token of appreciation or for items like virtual currency. One of the biggest groups doling out these gifts is minors, leading to disputes when they conduct such transactions using accounts or other identifying material from their parents or other guardians.

It’s not uncommon for such minors to give more than 7,000 yuan ($1,012) per month to their favorite livestreaming channels, and 650,000 yuan in a year is also not unheard of, according to the Chaoyang court’s report. But when a parent or guardian discovers their children giving such amounts, they will often dispute the transaction by saying they didn’t authorize it.