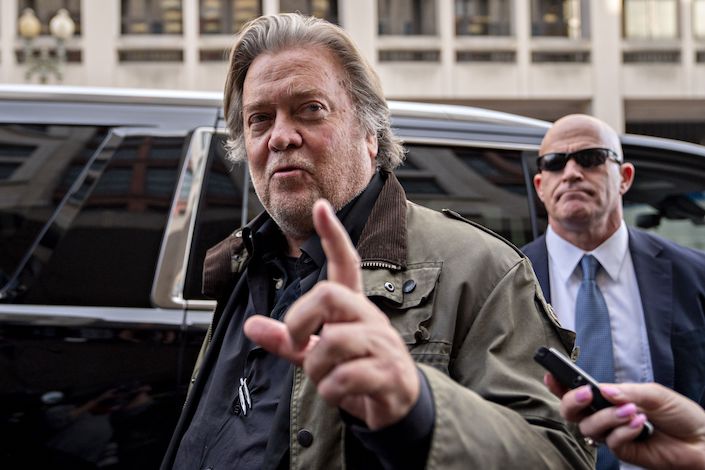 Stephen Bannon, one of the architects of Donald Trump’s 2016 presidential campaign, was arrested and charged with fraud over his involvement in an online group that raised more than $25 million to help fund a wall on the U.S.-Mexico border.

Despite portraying We Build the Wall as a volunteer organization, Bannon received more than $1 million from the group, some of which he used to pay his personal expenses, prosecutors said. He’s expected to appear in a New York courtroom Thursday. Three others were also charged in the matter, including the group’s founder, an Air Force veteran named Brian Kolfage.

“As alleged, the defendants defrauded hundreds of thousands of donors, capitalizing on their interest in funding a border wall to raise millions of dollars under the false pretense that all of that money would be spent on construction,” U.S. Attorney Audrey Strauss said in a statement.

William Burck, a lawyer for Bannon, had no immediate comment on the charges.

Bannon was arrested Thursday morning on a mega-yacht which reportedly belongs to one of his business associates, the exiled Chinese billionaire Guo Wengui. A media company linked to both men is also under investigation for violating securities laws, the Wall Street Journal reported Wednesday.

The news of Bannon’s arrest came as the Trump administration lost a bid to block a subpoena for the president’s tax filings. That ruling came in a case brought by the Manhattan district attorney.

Trump told reporters he didn’t support the Bannon project because he didn’t want a privately financed border wall. The project “sounded to me like showboating,” he said, and the arrest was a “sad thing for Mr. Bannon.”

The project has been ridden with controversies, including claims that it was built in floodplains and created erosion. It has been a sore spot for Trump. As recently as last month, he tweeted that he thought the project was a bad idea and poorly done, and that it was “only done to make me look bad.” That, despite the organization’s roster of Trump boosters including Blackwater founder Erik Prince and former Arizona sheriff David Alexander Clarke Jr.

If found guilty, Bannon and the others could face as many as 20 years in prison, although it’s rare for the maximum sentence to be imposed. According to the authorities, Bannon orchestrated the scheme alongside Kolfage; Andrew Badolato, an entrepreneur from Sarasota, Florida; and Timothy Shea, from Castle Rock, Colorado.

Kolfage launched We Build the Wall on a crowdfunding site in 2018 to raise funds for the U.S. government to help cover the cost of the border wall, a central promise of the president’s election campaign. Later, though, the fundraising campaign changed approach, raising money to construct a wall along privately owned parts of the border.

According to the indictment, the campaign promised donors that all the money would go toward construction in social media posts and other solicitations. In text messages, prosecutors say, Bannon and Badolato discussed how that assurance would help boost fundraising by creating a positive media narrative and, in Badolato’s words, removing “all self-interest taint.”

In reality, prosecutors say, Bannon used the funds to make hundreds of thousands of dollars in secret payments to Kolfage. To conceal the payments, Bannon moved the funds raised by We Build the Wall through a nonprofit he controlled before the money was transferred to Kolfage, according to the indictment.

In all, Bannon’s nonprofit received $1 million from We Build the Wall, prosecutors say. While some of that money went to Kolfage, Bannon kept hundreds of thousands of dollars to cover “personal uses and expenses unrelated to We Build the Wall,” according to the documents. For his part, Kolfage spent the money he received on home renovations, a luxury SUV, a golf cart, cosmetic surgery and jewelry, prosecutors say.

Bannon, 66, served as the chief executive of Trump’s 2016 presidential campaign and was the ideological architect of his populist vision. The former leader of Breitbart News helped Trump expand his appeal among the far right — often prompting accusations of racism and conspiracy-mongering. In the White House he was a leading proponent of the administration’s efforts to ban travel from a group of Muslim-majority countries.

But Bannon’s tenure in the administration was a rocky one. Opponents accused him of leaking frequently to the news media and rushing haphazard efforts to root out “deep state” opponents of the administration, while coverage suggesting that he was leveraging outsize influence to manipulate the president drew Trump’s ire.

Bannon was ousted just seven months into his role amid the firestorm over Trump’s handling of the violence that erupted surrounding white supremacist protests in Charlottesville. Bannon applauded Trump’s strategy of voicing support for some of the demonstrators protesting the removal of Confederate statutes who marched with individuals chanting Nazi slogans.

Shortly after he left the White House, Bannon began his business relationship with Guo Wengui, a real estate magnate who also goes by the name Miles Kwok. Guo has been on China’s most-wanted list for alleged money laundering, bribery and fraud. His cooperation with the ex-Trump adviser and China hawk started with a $150,000 loan he gave Bannon in May 2019, which later developed into a year-long million-dollar contract for consulting services, according to media reports.

Before Bannon’s arrest, the U.S. Federal Bureau of Investigation, New York state attorney general and Securities and Exchange Commission had launched an investigation into GTV Media Group, a media company associated with both men that raised over $300 million in a private offering this spring. The investigators are examining whether the deal violated security laws.

Guo is listed as the adviser and fundraiser of GTV, with Bannon as director, according to a company fundraising document the Wall Street Journal obtained. The company had planned to develop into a platform for news, social media and e-commerce with a pre-investment valuation of $1.8 billion.

Since its inception, We Build the Wall completed two sections of fencing along the U.S.-Mexico border, filling in empty gaps of the existing U.S. government barricade. A one-mile section was completed in Sunland Park, New Mexico, in May 2019, and a second three-mile stretch was completed along the Rio Grande river in Texas in February.

Reporting by Bloomberg and Caixin.