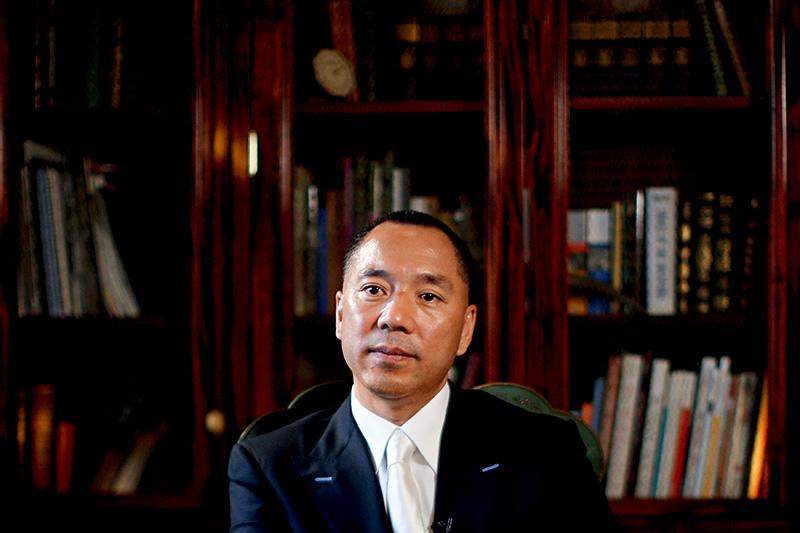 Caixin’s investigative reports into fugitive tycoon Guo Wengui, which started in 2015 with a look into his entanglements with senior state security official Ma Jian, can be seen as a breakthrough in Chinese media’s coverage of corruption among certain powerful people in the highly secretive national security apperatus.

Guo, the real estate magnate behind the dragon-shaped Pangu Plaza near Beijing’s “Bird’s Nest” National Stadium, has been listed by Interpol in an arrest notice at China’s request. Prosecutors in China are investigating a series of bribery, embezzlement and fraud cases allegedly linked to Guo and his companies, according to sources in the judiciary system.

Around 2014, when Guo fled China to avoid the investigations that brought down his close ally and former deputy head of the Ministry of State Security, Ma Jian, Caixin legal reporter Cui Xiankang began his own investigation.

Caixin delved into business and legal documents on Guo’s dealings going as far back as 1993. They revealed a career adorned with lavish real estate projects, large investment funds and securities firms that seemed to come with relative ease thanks to Guo’s apparent friendliness and trustworthiness, which won him key allies. Yet even as those friends fell to official anti-corruption campaigns, Guo seemed to emerge unscathed.

With Ma’s help, Guo, also known as Miles Kwok, was able to take down deputy Beijing mayor Liu Zhihua with a sex scandal that cleared the way for Guo to control a key land project near Olympic Park in northern Beijing, which became Pangu Plaza.

Even after fleeing China, Guo has continued to move capital among dozens of shell companies registered in the Hong Kong Special Administrative Region, the U.S., Canada and the British Virgin Islands to hunt for profits in the Chinese market and to fund his extravagant lifestyle in the U.S., Caixin found from records and sources close to the matters.

A large chunk of money Guo maneuvered overseas was raised from the Abu Dhabi royal family, our reporters found. Leveraging his ties with Ma and former British Prime Minister Tony Blair, who has known Guo since 2008, Guo portrayed himself as someone with an official background and promised tempting investment opportunities in China’s profitable financial institutions. These included Minsheng Bank, the country’s largest privately owned commercial lender.

But Guo’s promises of big investment returns never materialized. Instead, the Abu Dhabi investors later found part of the $3 billion they put in an investment fund managed by Guo had been used in loss-making deals, debt repayment and to fuel Guo’s personal spending, including the purchase of a yacht, sources said.

Guo has attacked Caixin for its investigations on several occasions. Caixin, in response, has filed lawsuits against Guo and his companies, accusing him of fabricating and disseminating false information.

Today, the fugitive Chinese businessman’s empire continues to unravel, as he loses control of the $3 billion investment fund established with the support of the Abu Dhabi royal family, makes unsuccessful investments in the Hong Kong stock market, and watches as his assets, frozen on the Chinese mainland, are sold off, including the landmark Pangu Plaza.