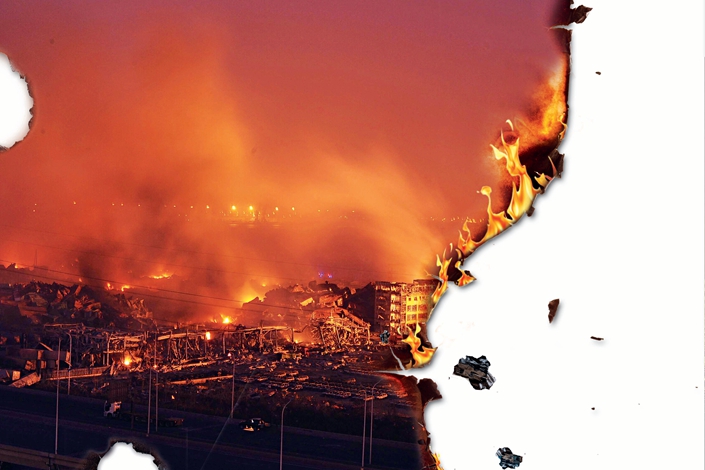 On Aug. 12, 2015, a series of huge industrial explosions shook the port city of Tianjin, killing 173 people and leaving hundreds more injured. More than 100 of the dead were firefighters who had been dispatched to combat the initial blaze at the Ruihai warehouse complex in the city’s southeast.

The incident was widely covered by Chinese media, which documented the devastation the blasts caused to the nearby warehouses and residential areas, and the subsequent human suffering.

The onsite coverage was abruptly halted after a week when the authorities ordered all reporters to leave the blast area. But Caixin did not stop digging into the causes of the incident.

Two weeks after the explosion, with the official investigation underway, Caixin published a cover story in its Chinese magazine brandishing a headline “The Human Errors Behind the Tianjin Blasts.”

“We should not just indulge ourselves with fragmented facts when a tragic disaster like this occurs, we must go deeper into the details of the whole incident and rethink why it has happened,” said Caixin editor Gao Yu, who oversaw Caixin’s coverage of this event, which involved a dozen reporters being sent to the site.

Caixin found numerous breaches of workplace safety measures, from the storage of hazardous chemicals to the fact the firefighters weren’t told the details of the situation they were being sent to face.

At the time, the Tianjin municipal government was scrutinizing Zhongbin Haisheng, a local warehouse safety assessor. According to official announcements, the complex where the explosions took place contained more than 40 types of hazardous chemicals, including 1,300 tons of ammonium nitrate and potassium nitrate, chemicals often used to make explosives.

But the discovery that an excessive amount of hazardous chemicals were being stored at the Tianjin port — which one executive told Caixin had lax supervision — came too late for the firefighters seeking to contain the disaster.

In interviews with Caixin, firefighters who had been on the scene said they used so much water that within 20 minutes, low pressure in the public water system forced them to search the port area for another source. When the commanders realized that the fire was getting worse, they ordered a suspension of firefighting operations and a retreat. Then came the first explosion.

“It’s of crucial importance that firefighters know what they’re dealing with before they arrive at the scene of a fire, academics say, in part because dousing some chemicals with water can make fires worse,” the Caixin report read. “But providing this information is almost impossible in China because oversight of hazardous chemicals is sorely lacking, according to a senior executive at a logistics company that handles dangerous chemicals.”

The Tianjin explosions that night put a magnifying glass over the lax implementation of safety standards and regulations in the hazardous chemical industry. The Ruihai warehouse complex was far too close to the general public — less than the 1 kilometer minimum required by safety standards set in 2001.

In 2016, the chairman of Tianjin Dongjiang Port Rui Hai International Logistics Co. Ltd., was sentenced to death with a two-year reprieve for his role in the incident.