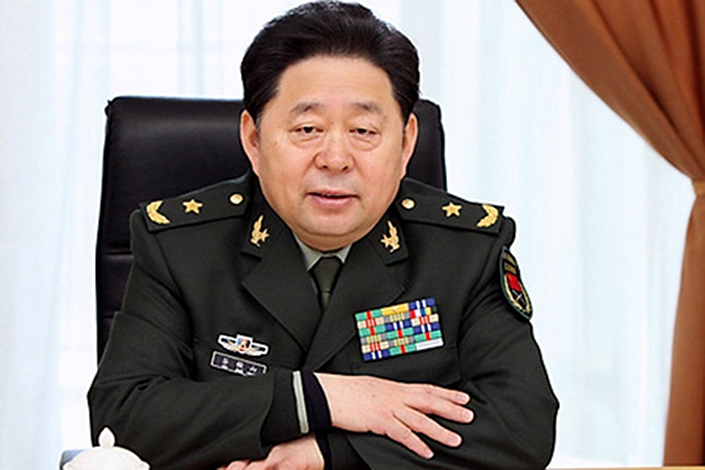 These stories include the tale of a corrupt top security official, a barbarian at the gate, a fugitive tycoon, the industrial safety failures that led to more than 170 deaths in a series of fatal blasts, and the environmental destruction wrought by the pursuit of economic growth at any cost. We will be publishing one story of the series each day through Nov. 11.

On Aug. 10, 2015, Gu Junshan, former deputy logistics chief of the People’s Liberation Army, was sentenced to death for corruption, with two years of reprieve — effectively life in prison.

Had it not been for Caixin’s five reports totaling 20,000 words in January 2014, the Chinese public would only have known little of Gu’s case except for a single official report by the state-run Xinhua News Agency in August 2015, which revealed few details besides naming his crimes, which included taking bribes, embezzlement and abuse of power.

There remains no official confirmation of how much money Gu pocketed while overseeing the logistics spending of the entire army.

“The military is virtually isolated from the outside world; it’s an area that basically has no outside supervision,” said Wang Heyan, a Caixin investigative reporter who followed Gu’s case for two years before Caixin published the explosive reports in early 2014.

Caixin had started reporting on Gu as early as 2012, right after the Ministry of National Defense quietly removed his name from its website — a move that often signals the beginning of a formal corruption investigation into an official.

In August 2013, when a professor with the PLA’s National Defense University for the first time publically confirmed the probe into Gu, Caixin published its investigation into the wealth Gu and his family had accumulated in his hometown of Puyang, Henan province.

Their family owned a tent factory and a furniture plant, both of which supplied the military. They also owned a real estate company that developed luxury apartments and office projects.

The reports documented Gu’s unbridled lust for wealth during his rise from soldier to general. Wang said the city of Puyang, especially the Dongbaicang village where Gu was born, was more like a family fiefdom. The villagers there showed Wang around for several days to see Gu’s family assets, including villas, buildings they had developed, and even a martyr’s cemetery Gu built for his father, though his father’s revolutionary past was fabricated.

There was also the notorious “General’s House” modeled on Beijing’s Forbidden City. In January 2013, investigators searched this mansion, seizing four truckloads of possessions, including crates of expensive Moutai liquor and a gold statue of Mao Zedong.

Caixin also revealed how Gu profited from land deals, including pocketing a 6% kickback from a 2.7 billion yuan land deal in Shanghai.

The PLA also launched a series of audits and inspections to examine wrongdoing in military procurement, property management and the handling of construction projects.

“I had hoped our reports on Gu Junshan would open a crack and usher in more similar investigative reports in the military system,” Wang said. “But so far, that seems to be it.”