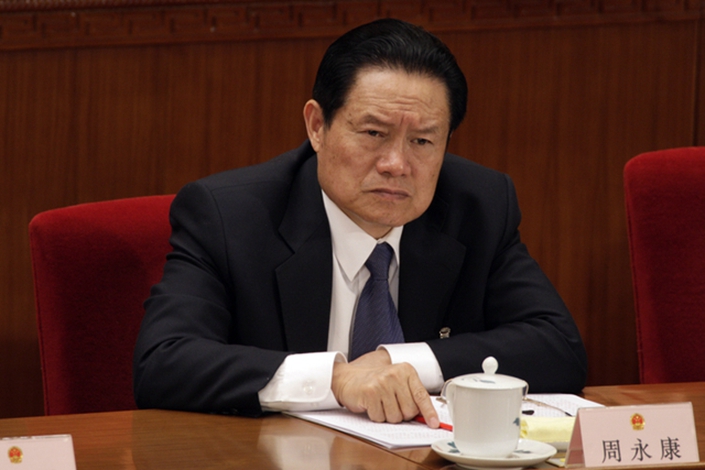 These stories include the tale of a corrupt top security official, a barbarian at the gate, a fugitive tycoon, the industrial safety failures that led to more than 170 deaths in a series of fatal blasts, and the environmental destruction wrought by the pursuit of economic growth at any cost. We will be publishing one story of the series each day through Nov. 11.

When state media announced the investigation into former security czar Zhou Yongkang’s “violations of party discipline,” the former member of the Communist Party’s most senior body became the highest ranking official to be taken down in President Xi Jinping’s anti-graft campaign.

The downfall of the ex-member of the Politburo Standing Committee in mid-2014 sparked a series of other corruption probes into figures linked to Zhou across China’s security apparatus, law enforcement institutions, state oil industry and his local power network in Sichuan. These included Jiang Jiemin, the former top state-owned asset manager; Li Chuncheng, Sichuan deputy party chief; Ma Jian, deputy head of the Ministry of State Security; and even Zhou Bin, his son.

Within an hour of the official announcement on July 29, 2014, Caixin published a comprehensive investigative report documenting the then 71-year-old’s life story, from childhood to downfall. Titled “The Red and the Black of Zhou Yongkang,” the report garnered hundreds of millions of page views and multiple domestic and foreign press awards.

Gao Yu, the executive deputy editor who led the task force looking into Zhou and his power network, said that “as a national leader and former Politburo Standing Committee member, the fall of Zhou Yongkang was a very important event in China’s modern history. We are proud as press that we were not absent from it.”

Caixin’s investigation began almost a year before the official announcement of Zhou’s downfall. The first hint that something was going on came in Aug. 1, 2013, when Wu Bin, a Zhou-linked powerbroker, was arrested in Beijing. Then later that month it was announced that four of Zhou’s proteges at state-owned oil giant China National Petroleum Corp. were under investigation.

Subsequently, Gao’s team began investigating the overseas assets of Zhou’s family and his network in the oil industry — which was where he worked his way up into power. Team members made a breakthrough in October when they uncovered how Zhou’s son had acquired state-owned oil assets for next to nothing.

In June 2015, Zhou, once the most powerful man in China’s security apparatus, was sentenced to life in prison for abusing power, taking bribes and intentional disclosure of state secrets. His wife and son were also sentenced to nine and 18 years in prison, respectively, for bribery.

“I believe that even Zhou Yongkang himself couldn’t predict the endgame of his own story,” Gao said. “There are many factors that changed his fate, not only his own personality and desires, but also a series of collective, organizational and institutional appeals that lured, pushed or dragged him to this path. We should be vigilant of those factors that one man cannot control.”