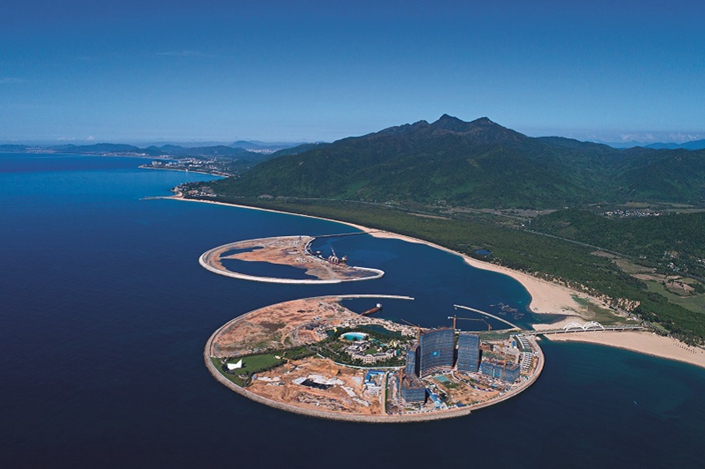 In 2017, Caixin published a series of reports, including a landmark cover story in October, on damaging land reclamation projects that would ultimately see local governments stripped of their power to approve them.

The stories exposed the powerful commercial interests behind reclamation in China’s coastal regions over the previous decade and the widespread damage they had done to marine ecosystems.

The series began in southern Hainan province with an investigation of projects backed by Hainan Airlines (HNA), China Evergrande Group and Sunac Holdings Ltd. With continued reporting, environmental groups pointed Caixin to reclamations elsewhere along the country’s eastern coastline, from southern Guangdong province all the way up to Liaoning in Northeast China.

Between 2013 and 2016, China reclaimed nearly 42,000 hectares (103,784 acres) of land, according to the State Oceanic Administration. Since 2006, 13,000 hectares have been reclaimed on average each year, swallowing up beaches, islands and wetlands. Prior to Caixin’s 2017 report, however, the scope and environmental impact was largely unknown to the general public.

Local authorities in China had embraced such projects as a way to create comparatively cheap land for development. Reclaimed land usually costs between 2.1 million yuan ($294,000) to 4.5 million yuan per hectare. Regular land plots in or near urban centers can sell at auction for tens of millions of yuan or more per hectare.

Local governments around China had been cutting corners, Caixin found. The three major development projects in Hainan backed by HNA, Evergrande, and Sunac either lacked government approval or involved other illegal construction, a central inspection group announced in December 2017 without naming the companies involved. The inspections also found East China’s Shandong province had issued 512 land reclamation permits since 2013 without necessary approval from the State Oceanic Administration. Zhejiang province had violated rules in the development of 44 land reclamation projects since 2015.

Land reclamation was devastating marshlands and mangrove forests, which are important breeding grounds for migrating birds, fish and other wildlife. They also protect the coastline from storms and help prevent soil erosion. The development projects in Hainan were singled out for their potential to further imperil the dwindling white dolphin population.

In January 2018, the State Oceanic Administration stripped local governments of authority over land reclamation approvals and said it would stop approving primarily commercial projects of that nature, saying only the State Council, China’s cabinet, had the power to do so.