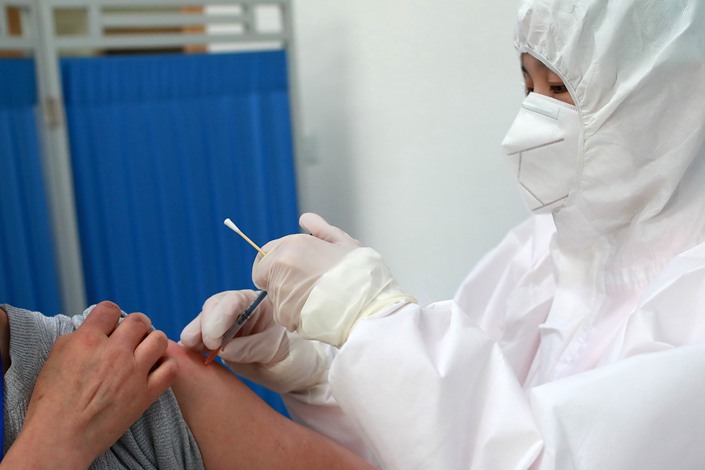 Officials are now evaluating whether to extend the program’s limited scope to other workers to prevent fresh outbreaks as China heads towards winter.

Chinese health authorities have been inoculating medical workers and other at-risk groups against Covid-19 for more than a month as part of an emergency access program, a senior health official has revealed, as he flagged plans to include other essential workers ahead of the winter flu season.

National coronavirus vaccine task force chief Zheng Zhongwei confirmed the existence of the program for the first time in a primetime interview with state media outlet CCTV on Saturday.

He said the emergency use was limited to people such as medical personnel, epidemic prevention officials and border inspection workers.

Zheng did not reveal which particular vaccine or vaccines are being used. Caixin has previously reported that shots developed by Sinopharm and CanSino Biologics that were in advanced clinical trials were also being given to some employees of state-owned enterprises.

The revelations illustrate the tension between efforts to quickly roll out potentially lifesaving medicines fast and the need to ensure they are safe and effective, and will raise ethical questions about informed consent and the monitoring of potential side-effects.

The head of the Chinese Center for Disease Control and Prevention, George Gao, told Caixin in July that he had personally taken an experimental vaccine, but would not publicly reveal which one, due to what he called a conflict of interest concern.

Program could expand to service workers

Officials are now evaluating whether to extend the program’s limited scope to other workers to prevent fresh outbreaks as China heads towards winter. Candidate groups could include those who work at produce markets like those in Wuhan and Beijing that have been linked to large clusters of the disease, as well as transport and service industry workers, Zheng said.

He said an informed consent plan was in place. Human coronavirus vaccine trials have been underway in China and overseas for months, but this is the first time Chinese health officials have publicly revealed an inoculation program outside of clinical trials.

The program officially began on July 22, Zheng said. It draws authority from China’s Vaccine Law, and from guidelines approved by the State Council on June 24.

Of the eight potential Covid-19 vaccines that are in late-stage trials around the world, five involve Chinese companies. Those are a viral vector vaccine by CanSino Biologics, an mRNA vaccine developed by a collaboration between Germany’s BioNTech, Pfizer and Fosun Pharma of Shanghai, two inactivated virus vaccines developed by subsidiaries of China National Pharmaceutical Group (Sinopharm), and an inactivated virus vaccine from private firm Sinovac Biotech.

Inactivated virus vaccines contain dead virus or viral fragments used to spark an immune response. They are generally considered safe, but this safety profile can come at the cost of effectiveness — multiple doses are often needed to build up immunity, and they may not protect people who already have weak immune systems.

Caixin previously reported that SinoPharm has been working with state-owned companies to vaccinate workers who need to travel abroad, and that in June China’s Central Military Commission — the country’s top military authority — approved CanSino’s vaccine for use on the nation’s troops.

Liu Jingzhen, chairman of Sinopharm Group, controversially said previously that he expected the company to have a Covid-19 vaccine on the market by the end of the year at a cost of 1,000 yuan ($144) for a two-dose course.

Zheng, who also heads the Science and Technology Development Center of the National Health Commission, addressed Liu’s comments directly in the CCTV interview, saying the cost needs to be “lower than what Mr. Liu said.”

Premier Li Keqiang told a press conference on May 28 that China still has 600 million people with monthly income below 1,000 yuan.

With the coronavirus situation in China broadly under control, many local companies developing experimental drugs and vaccines for Covid-19 have looked to other nations to perform human trials, including countries like Brazil where cases continue to surge.