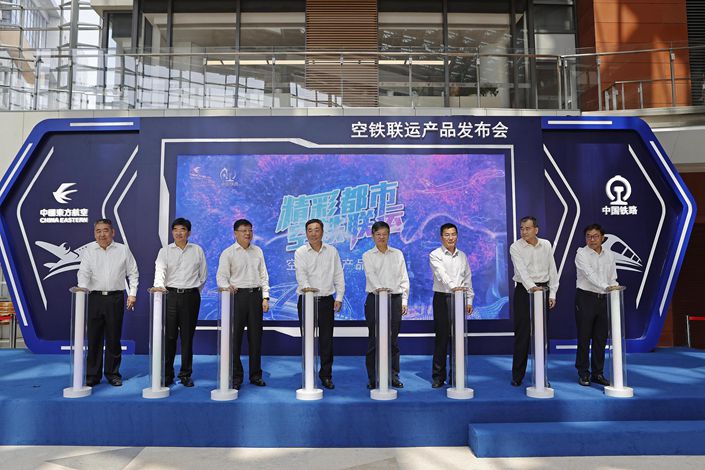 Officials from China Eastern and China Railway announce the tie up at an Aug. 25 launch event.

China’s rail operator and one of its top three state-owned airlines have rolled out a product integrating their tickets, a first-of-its kind national tie-up connecting the nation’s vast air network with its equally vast high-speed rail system that extends into smaller cities.

Such a system would mimic current air travel systems that allow passengers to buy a single ticket combining flights from several airlines through code-sharing and other partnership agreements. Currently, most rail and air tickets in China must be purchased separately.

For example, a customer using China Railway’s app to book a ticket from Beijing to Nanjing is now offered the option of a direct flight, but can also choose to fly first from Beijing to Shanghai and then do the Shanghai-to-Nanjing leg by rail, Caixin found.

The latest product is an extension of a relationship between China Eastern and the Shanghai branch of the national rail operator that dates back to 2014 when they began to integrate their products locally. The move to take the tie-up national comes as the Transport Ministry has called in recent years for better integration of the nation’s vast transport networks built up over the last three decades, including travel by rail, air, highway and water.

Building off that older alliance, the new one currently only allows for air-rail transfers at Shanghai’s Hongqiao airport and high-speed rail station, a mega-hub that combines the two forms of transport in a single location. But transfers will gradually be added in other major cities, including Beijing, Guangzhou, Shenzhen, Chengdu, Nanjing, Hangzhou and Wuhan, according to China Eastern.

China has spent hundreds of billions of dollars to build up its modern air, rail and highway networks as part of its economic modernization. It now wants to make those systems more complementary.

A document released by the Transport Ministry and several other government agencies in 2017 discussed speeding up the development of an “intermodal transport market system” for travelers over the next three to five years. The country’s aviation and rail regulators in 2018 signed a strategic cooperation agreement on integrating their two networks. China Eastern and China Railway signed a cooperation agreement a year later that resulted in the latest integrated ticketing product.