Cover Story: How China Is Racing to Catch Up With Money Launderers 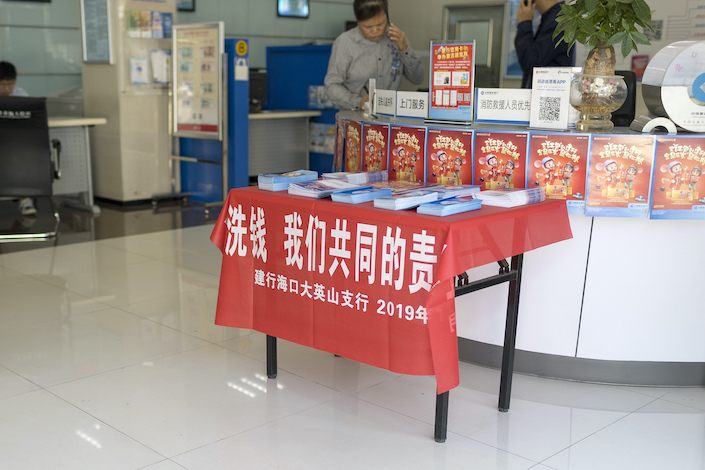 An anti-money laundering slogan displayed at a bank in Haikou, Hainan.

Regulators got a wake-up call in 2019 when the international Financial Action Task Force (FATF) on money laundering highlighted flaws in China’s system. Later that year, several Chinese lawmakers submitted proposals to amend the nation’s 13-year-old anti-money laundering law to catch up with the rapid evolution of financial criminality.

In a video address to a virtual meeting in June of the FATF, a global money laundering and terrorist financing watchdog, People’s Bank of China Governor Yi Gang said China is revising its anti-money laundering law to broaden the scope of supervision, enhance its effectiveness and increase the severity of penalties.

If not for the Covid-19 pandemic, the top-level international conference on anti-money laundering would have been held in Suzhou in the first time for China to host a plenary meeting of the organization. The FATF was founded in 1989 on the initiative of the G-7, the Group of Seven leading industrialized nations, to develop policies and set standards to fight money laundering. China joined the intergovernmental organization in 2007, the same year the country enacted its first anti-money laundering law.

Money laundering, so-called after Chicago gangster Al Capone’s practice of legitimizing criminal proceeds by running the funds through cash-only laundromats in the 1920s, is a huge and growing problem. The estimated volume of money laundered globally every year accounts for as much as 5% of global GDP, or $2 trillion, according to the United Nations Office on Drugs and Crime.

In the past year or two, China’s anti-money laundering efforts have drawn increasing attention in international financial circles. The People’s Bank of China (PBOC) has been ramping up punishment of financial institutions that fail to adequately guard against money laundering.

In the first six months of 2020, the PBOC doled out penalties of more than 370 million yuan ($53.89 million) for money laundering violations, exceeding the total for all of 2019, data from the central bank showed.

The significant increase in fines reflects a revision in the way the central bank calculates punishment of financial institutions that fail to effectively guard against money laundering. Such institutions would previously receive only one fine at a time regardless of how many rules they broke. Now multiple penalties are imposed for multiple violations. The largest single fine the central bank imposed exceeded 100 million yuan.

Rapid developments in financial information, technology and communication allow money to move anywhere in the world with speed and facility, making it easier to hide the true sources of funds from criminal activities. This also makes the task of combating money laundering harder and more urgent than ever.

But with the evolving means of money laundering, China’s law enforcement has been unable to keep up with international standards. Among shortcomings of China’s current statute, lawmakers proposing amendments said, is that limitations on the definition of upstream money laundering cannot meet the practical needs of combating crimes. In addition, they argued, the severity of punishment is relatively lenient, the scope of punishment is relatively narrow and anti-money laundering efforts fail to reflect proactive “risk-based” principles.

According to a work report of the Standing Committee of the National People’s Congress released May 25, the amendment of the anti-money laundering law has been placed on this year’s legislative agenda. A public consultation on the amendment is expected to be conducted by the end of this year, Caixin learned.

Scope needs to be expanded

One key change will be expanding the definition of criminal money laundering. For example, illegal informal banking networks are often used in money laundering, but cases involving such underground lenders are mostly prosecuted as “crimes of illegal business operation” rather than money laundering. The sentencing is relatively lenient relative to the damage these illegal lenders cause to society, said Yang Xiaoping, former governor of the PBOC’s Kunming Branch.

In addition to underground lenders, pyramid sales schemes and gambling are also often related to money laundering, but those crimes are rarely prosecuted as money laundering.

“FATF considers it inconceivable that China, the world’s second-largest economy, has only a few dozen ‘money laundering’ convictions a year,” a person close to the assessment told Caixin.

“If a corrupt official launders his own bribery money by transferring and hiding it, this is not considered money laundering under current law,” a senior anti-money laundering regulator said.

“A lot of behaviors may not qualify as crimes, such as individuals leasing or selling their identifications or accounts to other people, which could facilitate money laundering,” a person close to the work on amending the statute said. The revised law would consider making these activities illegal, the person said.

The FATF’s evaluation also pointed out that China’s anti-money laundering supervisory system is almost exclusively focused on the financial sector while there are no effective preventive or supervisory measures covering the nonfinancial sector.

“The PBOC’s level of understanding of risk in the nonfinancial sector is low, as little work has been done in this sector,” the evaluation found.

Switch from check-the-box to risk-based approach

Most financial institutions in China are familiar with their anti-money laundering compliance obligations, but they often do not understand the money laundering risks they face, the FATF evaluation said.

“The risks of money laundering are different for different types of financial institutions operating in different regions,” said Yu Pei, partner of the Deloitte China Anti-Money Laundering Center. “However, domestic banks have not yet made a good risk assessment of themselves and do not know where they are exposed to money laundering risk. They just mechanically complete their compliance obligations but fail to implement more targeted risk-control measures.”

In February 2012, the FATF published its updated standards on combating money laundering, recommending a risk-based anti-money laundering principle. This requires financial institutions to assess the risks associated with illicit activities such as money laundering and terrorist financing and then reasonably deploy corresponding resources in response to the risks.

The revision of China’s anti-money laundering law will consider adoption of such a risk-based principle and require related parties to carry out money laundering risk assessments, allocate regulatory resources according to the risk and impose prevention and control measures.

A senior Chinese anti-money laundering regulator held up rampant cross-border telecommunication fraud as an example. In the compliance-based approach, a responsible institution is considered to have fulfilled its obligation by reporting suspicious transactions, but there is nothing it can do if the criminals withdraw fraudulent funds abroad. However, under the risk-based principle, the responsible institution in addition to reporting suspicious transactions should immediately take reasonable risk control measures, such as restricting related accounts and suspending online banking or overseas cash withdrawals, the regulator said.

For Chinese financial institutions that are used to a “check-the-box” compliance approach, switching to a proactive risk-based principle will be a big challenge. If banks are required to include all transactions of clients in anti-money laundering monitoring, it will be too much work, said an anti-money laundering official at a city commercial bank.

“If customers have to wait longer for the service, they may be gone,” the official said.