By Bo Xue and Mo Yelin 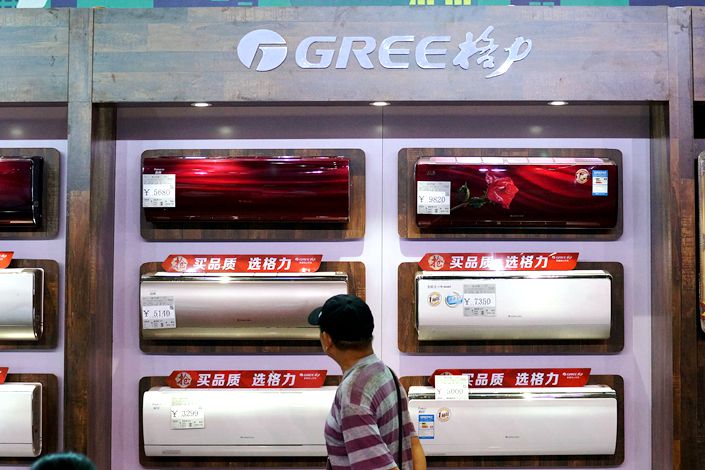 A customer takes a look at Gree air conditioner units in Tianjin in August 2020.

In the six months through June, Gree sold 41 billion yuan ($6 billion) worth of air conditioner products compared with Midea’s 64 billion yuan, according to data from the two firms’ semi-annual earnings reports released (link in Chinese) Monday.

It is the first time in at least two decades that Gree has lost its market crown in air conditioning. With both companies based in South China’s Guangdong province, Gree makes most of its revenue from selling air conditioners, but Midea has a more diversified set of businesses, including an industrial-robot manufacturing unit.

In recent years, Midea has incrementally encroached on Gree in the air conditioner business. It has competed on price with offers of massive subsidies to consumers and targeted buyers in online markets that Gree was late to focus on.

Both companies in their respective earnings reports cited the Covid-19 pandemic as a drag on business during the first half of this year. However, Midea’s edge built up over many years to sell products through online channels allowed it to cope with the pandemic much better than Gree.

For the six months through June, Gree’s overall sales of air conditioner products were down 48% on the same period last year, compared with just 10% for Midea, according to the two companies’ earnings reports.

Amid sluggish sales at its physical retail stores during the pandemic, Gree launched a campaign in April to increase sales online as part of a long-running effort to bolster its sale performance over the internet.

Chairwoman and President Dong Mingzhu made headlines at the time after appearing in several social media platforms, including Douyin, the Chinese mainland’s version of TikTok, to sell products herself through live-streaming programs.

Gree also moved to cut prices for its air conditioner products to enhance sales, but they were still significantly higher than Midea’s prices. According to All View Cloud, Gree’s average price for an air conditioner sold through online channels was 2,833 yuan in the first half of 2020, compared with 2,351 yuan for a Midea product.