By Huang Shulun and Yang Ge 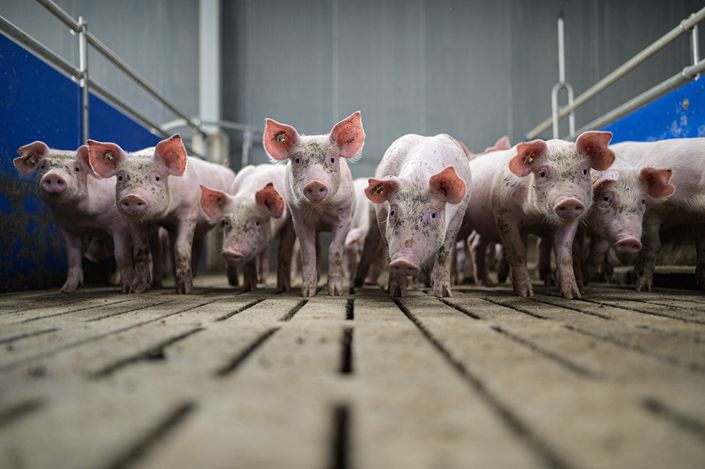 Animal feed specialist New Hope Liuhe Co. Ltd. reported its pig-raising business more than tripled in the first half of the year, buoyed by prices that have spiked for nearly two years on lingering fallout from a swine fever outbreak, compounded by disruptions during the global Covid-19 pandemic.

Liuhe and other major producers have seized on high prices created by short supplies to build up their hog-raising business over the last year, as Beijing and local governments encourage sector consolidation around better-run major corporate producers over traditional family farms.

The company’s pork-related business now accounts for about 16% of its revenue, and is one of its fastest-growing segments. Revenue from the business rose 261% in the first half of the year to 6.9 billion yuan ($1 billion), according to the company’s first-half financial results (link in Chinese) released on Sunday.

Liuhe is China’s largest animal feed supplier, but more recently moved into the pig-raising business in pursuit of higher margins. As it has gained scale, the company’s realized gross profit from the business rose more than sevenfold to 2.96 billion yuan in the first half of the year, with a profit margin of 42.6% for the business — far larger than margins for its traditional animal feed business.

That part of its business had capacity for raising 18 million pigs as of the end of June. It sold 2.12 million pigs in the first half of the year, marking a 58% increase over the same period of 2019.

The African swine fever outbreak that ravaged China’s pig population dates back to August 2018. The highly-infectious disease has killed millions of pigs, and forced the slaughter of millions more as farmers and agricultural officials tried to control the spread.

The outbreak led to a 21.3% drop in pork production last year, which reached 42.55 million tons. Liuhe told Caixin the Covid-19 pandemic has had the effect of prolonging production shortfalls and the duration of high prices in the industry.

The industry is slowly rebounding as the virus recedes, but pork prices remain high. Government data showed that the average price for live pigs was 33.9 yuan per kilogram in the first six months of the year, up 137% from a year earlier. Expensive pork has been one of the main drivers for China’s consumer inflation since the outbreak began, with prices up 85.7% year on year in July.

Other breeders have also benefited from the high prices and consolidation. One of the nation’s top breeders, Wens Foodstuff Group Co. Ltd., previously reported selling 4.87 million pigs in the first half of the year, with pork sales bringing in 23.3 billion yuan in revenue, up nearly 30% from a year earlier. Strong prices also helped to lift breeder Muyuan Foods Co. Ltd. back to a profit of 10.8 billion yuan in the first half of the year, after the company reported a 156 million yuan loss in the same period of 2019.