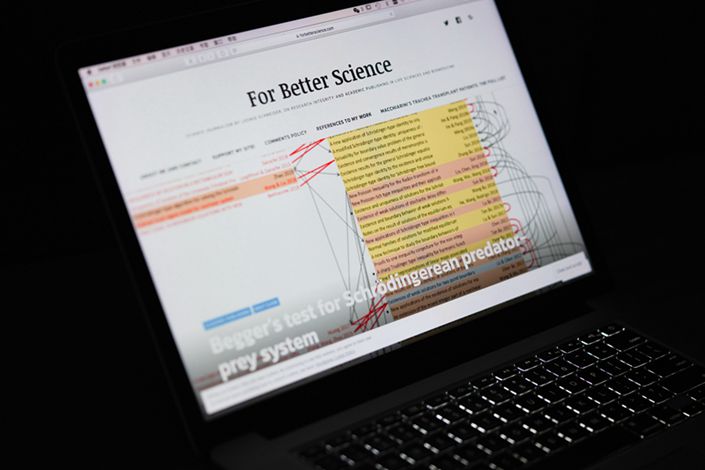 For years, China has been plagued by academic misconduct as researchers race to publish, in order to get funding, jobs and promotions. Photo: Ding Gang/Caixin

In the latest blow to China’s already severely dented scholarly reputation, allegations that academics sought out the services of a “paper mill” that produced plagiarized math papers have led to the withdrawal of two dozen articles by internationally peer-reviewed journals.

For years, China has been plagued by academic misconduct as researchers race to publish, in order to get funding, jobs and promotions. This publish-or-perish culture has driven demand for paper mills which produce faked or plagiarized papers that allow under-pressure researchers to get their name into respectable journals.

In mid-June, two independent science journalists, who go by the aliases Smut Clyde and TigerBB8, claimed that 65 papers published by 77 Chinese researchers at 42 institutions were produced by a math paper mill.

None of the authors involved have publicly responded and none of their institutions has announced anything related to the accusations.

A total of 24 papers have since been removed from journals including the International Journal of Mathematics, published by Singapore’s World Scientific, and Boundary Value Problems, which is published by U.S.-based Springer.

Caixin also found that at least 20 more of the papers cited in the journalists’ report had been removed prior to its publication.

The journalists claim that almost half of the Chinese clients came from the less-prestigious Henan University of Economics and Law (HUEL), based in Henan province’s capital Zhengzhou. But the mill’s services were also allegedly used by senior academics at some of China’s top universities, including Harbin Engineering University and Henan University. Many of the academics accused of involvement in the scandal are not mathematics specialists.

The plagiarism saga can be traced back to a paper published in 2012 in the U.S.-based journal Abstract and Applied Analysis, published by London-based Hindawi Publishing. The authors, including Qiao Lei at HUEL, were all based in Zhengzhou.

Two years later, the paper, with its name unchanged and content slightly tweaked, was re-published by two other Zhengzhou-based researchers in the Springer-published Indian journal Proceedings - Mathematical Sciences, without any credit to Qiao’s paper. The article, which has yet to be removed from the journal, is almost identical to Qiao’s, repeating formulas, calculations, explanations and conclusions, with a few changes to phrasing.

It remains unclear whether Qiao was aware of the apparent plagiarism by his colleagues. But the second paper claims to have been supported by two grants administered by Qiao from the state-owned National Natural Science Foundation of China (NSFC). They also praised Qiao’s PhD supervisor Deng Guantie for “very useful conversations related to this problem.”

Qiao’s papers seem to have been a popular target for those looking to crib material. In January, the journal of Fixed Point Theory and Applications retracted a paper written by one of Qiao’s HUEL colleagues in 2015, for “invalid” results and “evidence of both peer review and authorship manipulation.” The article shows “significant overlap” with four previously published articles, three of which list Qiao as an author, according to the retraction note.

But Qiao is also not beyond suspicion. In late July, the International Journal of Mathematics retracted a paper published in 2013 that listed Qiao as the lead author. He was added as a co-author without approval after the article was accepted, according to the journal’s statement. One of the paper’s theorems was also found to be mathematically incorrect.

Qiao did not respond to Caixin interview requests but his doctoral supervisor Deng, whose articles co-authored with Qiao have been plagiarized several times, told Caixin that he had no idea about what happened, and condemned such actions.

The journalists also wrote that the paper mill invented some “European-university-affiliated and western-named fictional co-authors” to make the math papers “seem less Chinese, or more white.”

For example, in two papers submitted by Zhao Tao, a researcher at HUEL, his supposed co-author Alexander Yamada from the School of Mathematics at Stockholm University acknowledged support from an Academy of Finland grant. But neither Yamada nor the grant exist, the related journals have since announced.

In a statement on Aug.17, the International Journal of Mathematics said the author of the retracted paper “listed a false affiliation with a Spanish University at the time of the submission and changed it after acceptance without approval.”

By creating Western co-authors, the papers could “signal the international reputation and far-flung collaborative capacity” of the authors, said the investigators.

Many of the accused have apparently received support from government-backed provincial or national foundations. The NSFC, according to its website, is “directly under the jurisdiction of the State Council,” China’s cabinet, and has implemented “a rigorous and objective merit-review system” to support basic research, foster talented researchers and develop international cooperation.

But “how [the authors] secured that funding without the capability to write the papers expected in return, thus obliging them to call on the services of a paper mill, is a question in itself,” wrote Smut Clyde.

In China, researchers’ performance is evaluated based on the papers they have published, with quantity being an important indicator. They are encouraged, and at times expected, to publish in international journals with a high impact factor. This has led the country to become the world’s top paper-publisher in the field of natural sciences.

However, China’s rise has been accompanied by a slew of academic scandals, including a massive peer-review fraud scandal in 2017 which involved more than 400 researchers.

The Ministry of Education and Ministry of Science and Technology jointly released a document (link in Chinese) in February, which called for an end to the “excessive reliance” on publication in top-tier journals for academic promotions, allocation of research funding and university rankings. Earlier this month, the ministries again issued a notice calling to improve researchers’ professional integrity.