In Depth: New Breed of Fintechs Line Up to Follow Ant Group’s IPO 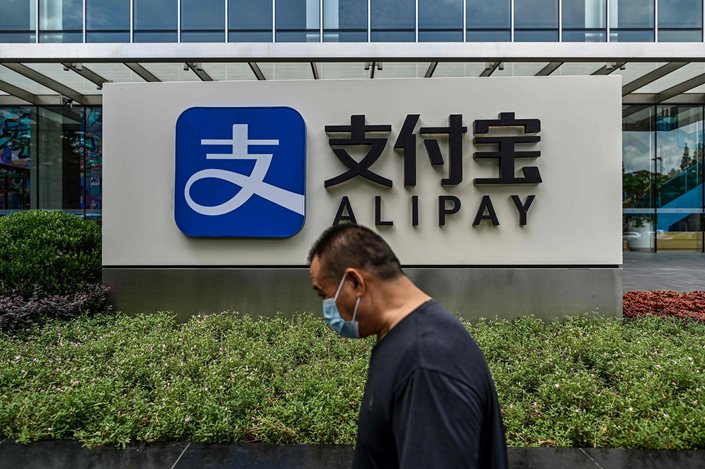 A pedestrian walks past a sign for Alipay outside of Ant Group’s offices in Shanghai on Friday.

Following the boom and bust of an earlier generation of financial technology startups, many centered on a peer-to-peer (P2P) lending business model, a new generation of better regulated fintechs is taking their place. Many of those could be coming to market this year, led by what’s expected to become a world record-setting IPO by Ant Group Co. Ltd., the financial affiliate of e-commerce giant Alibaba Group Holding Ltd.

But Ant Group is just the beginning. Buzz coming from the company’s blockbuster dual listing in Hong Kong and on the Chinese mainland, which could raise up to $30 billion, could encourage some smaller fintech peers to expedite their public debuts as well.

A 2019 report by KPMG showed that seven Chinese fintechs have attained the status of unicorn, meaning they’re still unlisted and valued at more than $1 billion. Two of those, Lufax and JD Digits, are behind only Ant Group in terms of market value, and are both reportedly considering IPOs.

But while many of the Fintech 1.0 problems have been worked out by now, more regulatory headwinds could lie ahead for the new group. On July 31, just days after Ant Group announced its IPO plan, a Reuters report said China’s antitrust watchdog was weighing a probe into the company’s crown jewel, its Alipay electronic payments platform, as well as a similar service connected to Tencent Holding Ltd.’s popular WeChat app. And on July 16, the State Administration for Market Regulation for the first time since 2012 reviewed a transaction involving the variable interest entity (VIE) company structure, a legal tool often used by Chinese tech firms to list offshore and avoid paying higher taxes.

In its prospectus filed on Aug. 25, Ant Group admitted that regulators have been ramping up enforcement of antitrust laws and targeting dominant industry players. It pointed out that “because of the large scale of the company’s business and close media attention, there can be no assurance that regulators will not initiate anti-monopoly investigations into specific business practices.”

Whether the signals hint at the coming of a fresh crackdown, similar to the one that killed Fintech 1.0, remains to be seen. Meantime, the following are four fintech unicorns worth watching this year, all either aiming at IPOs in the near future or that are in their late financing stages.

Established in 2011, Shanghai Lujiazui International Financial Assent Exchange, better known as Lufax, is an online asset management platform controlled by insurance giant Ping An Insurance Group Co. of China Ltd. The company started as a P2P lender, but ended up ditching the model last year amid the regulatory crackdown.

Following its start in P2P lending, Lufax expanded into insurance, financial advice and online loans, among other services. It has become one of China’s largest digital wealth management platforms and was valued at $39.4 billion in its series C financing in December 2018. In April, the company attracted another $1.29 billion in funding from Bank of America, Morgan Stanley, UBS, and other foreign banks.

In mid-August, Reuters reported Lufax had made a confidential IPO filing in the U.S. with an aim to raise at least $3 billion. Market analysts point out that the move could help Lufax secure a U.S. funding channel amid geopolitical tensions between the world’s two largest economies that could potentially restrict Chinese companies’ access to Wall Street.

JD Digits is one of the major units of e-commerce giant JD.com Inc., alongside JD Retail, JD Logistics and JD Health. In October 2013, JD.com established its JD Finance fintech unit, which has since gone into insurance, securities, third-party payments and consumer finance.

In June 2017, JD Finance was spun off so it could obtain certain financial licenses from Chinese regulators, people familiar with the matter told Caixin at the time. A year later, it changed its name to Jingdong Digital Technology Co. Ltd., or JD Digits.

In 2011, retailing giant and e-commerce aspirant Suning.com Co. Ltd. stepped into the fintech sector with its establishment of Suning Yifubao, a third-party payment platform that later evolved into Suning Finance. The unit’s financial services include microlending, insurance and factoring services. The company was valued at $8.1 billion at its series C financing round in September and had amassed 400 million registered users by 2019.

Suning Finance says it targets small and micro businesses that often have trouble getting loans from big banks due to their lack of credit history. The company’s parent supplies shopping and sales data from its retail operations to help Suning Finance determine borrowers’ creditworthiness. The company has more than 13,000 brick-and-mortar locations in China.

Although Suning Finance has not announced any IPO plan, it conducted a major fundraising last September when it attracted $1.45 billion in its series C financing. At that time it announced its finances would no longer be incorporated into the financial statements of Suning Yigou, the retailing unit of Suning. Some market analysts interpreted the moves to mean Suning Finance was seeking independence from its retail parent so it could expand its business in financial services industry or even prepare for a future IPO.

Established in September 2014, VZoom is one of China’s top players in the emerging field of credit assessment firms that serve as an intermediaries between small businesses and regulators. It counts Ant Group as its second biggest investor. With expertise in tax data analysis, VZoom provides regulators with risk control tools and plays an important role in deciding the creditworthiness of businesses seeking government loans.

In June, VZoom filed for an IPO on the STAR Market to raise about 260 million yuan ($38 million). It generated 154 million yuan in revenue last year, double the figure from the previous year, mainly from credit technology and risk advisory services, according to data released in its June prospectus. If its IPO proceeds on schedule, VZoom could become the first credit technology firm to be listed in China’s A-share market.