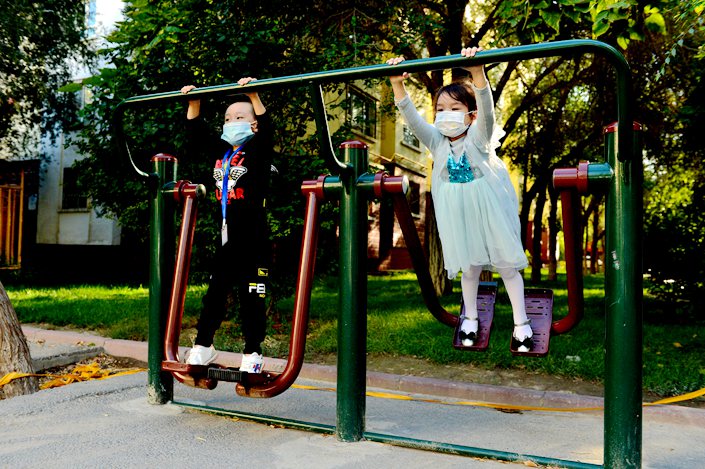 Children play in a residential area in Urumqi, Aug. 29.

The region’s Communist Party Committee on Tuesday night held a video conference to announce the “comprehensive resumption” of ordinary life and economic production.

The government has lifted stay-at-home orders for virus-free communities in most cities, including the capital Urumqi, the center of the latest outbreak, after imposing a region-wide lockdown for 45 days.

Since the imposition of the measures on July 15, Urumqi had sealed off all communities, locked many residents in their homes, shut down all public transportation services and cancelled flights in and out of the city.

As of Tuesday, Xinjiang had 22 symptomatic Covid-19 cases who had yet to recover, along with nine asymptomatic cases who had yet to test negative for the disease, all in Urumqi, while 560 people across the region were still under medical observation, according to the local health commission (link in Chinese). A total of 826 cases were reported in Urumqi in the latest outbreak.

Multiple Urumqi residents told Caixin that they are now allowed to enter and leave their communities after producing entry-exit passes, and neighborhood restaurants and stores are gradually reopening.

However, some communities remain in lockdown. Caixin has learned from a resident of Urumqi’s urban Shuimogou district, where symptomatic cases have previously been discovered, that the area is still under lockdown. Residents were told by community management staff that the lockdown won’t be lifted until Sept. 6.

On Saturday, the city downgraded the Covid-19 risk rating of all its districts, including Shuimogou, to the lowest level.

Public transportation has also rumbled back to life since Saturday and over 1,200 taxis have resumed work, according to a statement (link in Chinese) published by the city’s transport department.

Urumqi residents are also now allowed to leave Xinjiang for medical treatment or education, if they can produce a negative Covid-19 test from the preceding seven days and their digital health code shows no problems. The city’s airport has gradually resumed outbound flights after the epidemic-led travel restrictions capped the number to around 10 inbound and outbound flights a day.

In addition to the capital, other parts of Xinjiang have been given the green light to ease their local lockdowns after assessing their own level of risk, according to an official document obtained by Caixin. Last Monday, Aksu was unsealed; followed by the Ili Kazakh autonomous prefecture, Bayingolin Mongol autonomous prefecture and Altay on Saturday; then Tacheng and Kashgar on Sunday.

All outdoor scenic spots in Xinjiang reopened to the public on Wednesday while interprovincial tourism has also now been allowed to resume, local media outlet Tianshan Net reported, citing officials from the regional tourism department.