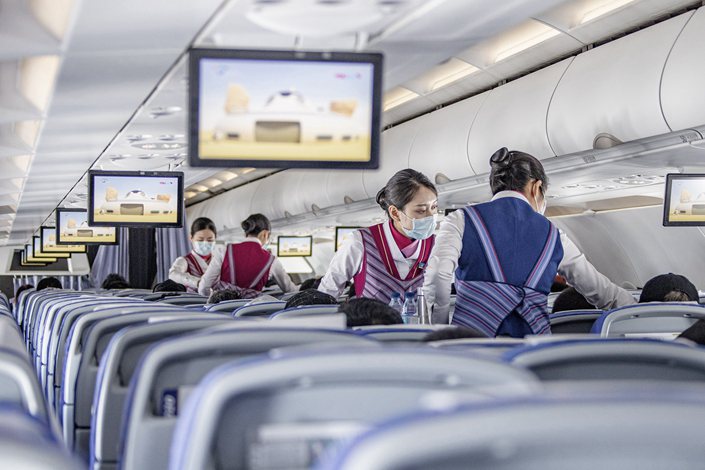 The Caixin China General Services Business Activity Index, which gives an independent snapshot of operating conditions in the services sector, fell to 54 last month from 54.1 in July. The index has been in expansionary territory for four months in a row, though it has come down from a decade-high in June. A number above 50 indicates an expansion in activity, while a figure below that points to a contraction.

The index’s performance showed that the sector continued to recover from the fallout of the Covid-19 pandemic as people’s spending on services, such as movies, was returning to normal after recent clusters of coronavirus infections were contained.

Unlike services, manufacturing activity expanded at a faster pace in August. The Caixin China General Manufacturing Purchasing Managers’ Index (PMI) rose to 53.1 last month, reaching its highest since the start of 2011.

The breakdown of the Caixin services index showed that total demand continued to recover, with new orders increasing for four months in a row, though at a slower pace. Overseas demand remained sluggish, with the measure for new export business staying in negative territory for the second consecutive month.

Employment in the services sector showed promise as increases in business activity and sales led service providers to expand staffing for the first time in seven months. “This contributed to a stronger increase in input costs, which in turn drove a renewed rise in output charges,” IHS Markit Ltd., the London-based data analytics firm that compiled the index, said in a statement accompanying the data.

In the manufacturing sector, the job market also showed signs of stabilizing as the employment measure came the closest to expansion since December. “Improvement in employment in the post-epidemic era requires longer-term market recovery and longer-term stability of business expectations,” said Wang Zhe, senior economist at Caixin Insight Group.

Service companies remained generally upbeat about the outlook for business over the next 12 months, but the degree of optimism dipped to a three-month low. “There were also some companies that expect the pandemic to continue to impact their business operations and sales in the months ahead,” IHS Markit said in the statement.

The Caixin China General Composite PMI, which covers both manufacturing and service companies, rose to 55.1 last month from 54.5 in July. Caixin PMIs are some of the earliest available monthly indicators of economic conditions in China.