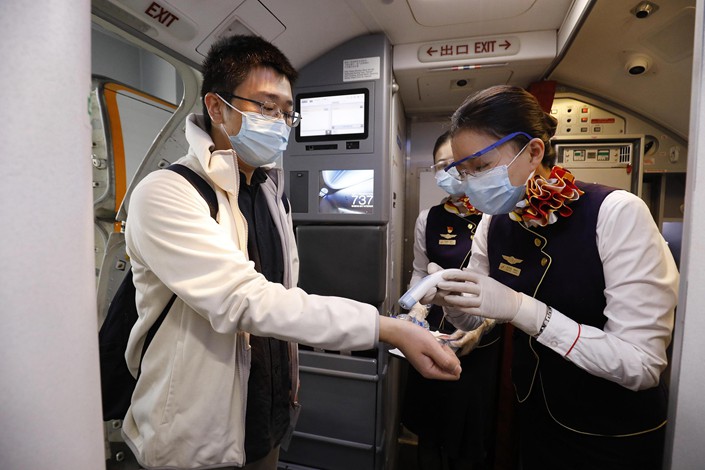 A flight attendant takes the temperature of a passenger in an airplane in Shanghai on April 13.

Services activity in China expanded at the quickest pace in over a decade in June as domestic and overseas demand recovered, a Caixin-sponsored survey showed Friday, adding to signs that the country’s economy is continuing to recover from the Covid-19 pandemic.

The Caixin China General Services Business Activity Index, which gives an independent snapshot of operating conditions in the services sector, rose to 58.4 from 55 the previous month, the fourth monthly increase in a row. The reading was the highest since April 2010. A number above 50 indicates an expansion in activity, while a figure below that points to a contraction.

The reading follows an increase in manufacturing activity seen in the Caixin China General Manufacturing Purchasing Managers’ Index (PMI) for June, released Monday, which rose to a six-month high of 51.2. The Caixin China Composite PMI, which covers both manufacturing and service companies, came in at 55.7, up from 54.5 in May, the Thursday survey showed.

“Since mid-March, China’s economy has staged an impressive comeback, bolstered by pent-up demand, a catch-up in production, a surge in medical product exports and stimulus in both China and other major economies that has bolstered demand for goods made in China,” economists at Nomura International (Hong Kong) Ltd. wrote in a note on Monday. They raised their estimate for year-on-year GDP growth for the second quarter this year to 2.6%, up from 1.2%.

China’s services sector took a big hit amid the domestic epidemic during February and March, as people canceled travel plans and avoided gatherings due to the government’s social distancing requirements designed to contain the spread of the deadly virus. Most companies in industries including catering, film, luxuries, tourism and hotels saw their profits plunge and ran short on cash.

But now that China has largely gotten its epidemic under control, service companies broadly reported that market conditions had continued to improve, following an easing of virus-related restrictions, the survey said.

The monthly services PMI survey for June, which was carried out between June 12 and June 22, showed total new business rose at the quickest pace since August 2010. The measure for new export business in June jumped into expansionary territory for the first time since January, rising for the second straight month. Higher amounts of new business last month led the gauge for outstanding workloads to increase into positive territory for the first time since February.

Service companies were increasingly optimistic about the business outlook for the next 12 months, with the gauge of output expectations last month hitting the highest in three years.

It wasn’t all good news, however. The employment gauge for the services sector remained in negative territory for the fifth straight month, slipping slightly from May. That underscored Premier Li Keqiang’s focus on protecting and creating jobs in his annual work report to the delayed meeting of the National People’s Congress, China’s legislature, in May.

“Employment remained the key problem,” said Wang Zhe, a senior economist at Caixin Insight Group. “Although businesses were optimistic about the economic outlook, they remained cautious about increasing hiring, with employment in both the manufacturing and services sectors shrinking.”

The labor market could come under more pressure in the second half of this year, with nearly 9 million new graduates joining the labor force in July, multiple economists said.

Wang said that “addressing the employment problem requires not only macro policies to further promote work resumption, but also more targeted relief measures introduced by governments to tide companies over.”

China has taken a series of measures to bolster businesses ravaged by the Covid-19 pandemic. On Tuesday, the central bank announced (link in Chinese) it would cut the rediscount rate by 25 basis points on July 1 — the first such reduction in a decade — to inject liquidity in the financial system. In addition, the State Council decided at a Wednesday meeting that local governments are allowed to replenish the capital of small and midsize banks by selling special-purpose bonds — a move that aims to increase bank financing for small businesses. Special-purpose bonds are designed to fund infrastructure and public welfare projects that are commercially viable.

The Nomura economists expected Beijing will maintain its easing stance in the coming months due to rising uncertainty.