By Luo Guoping and Mo Yelin 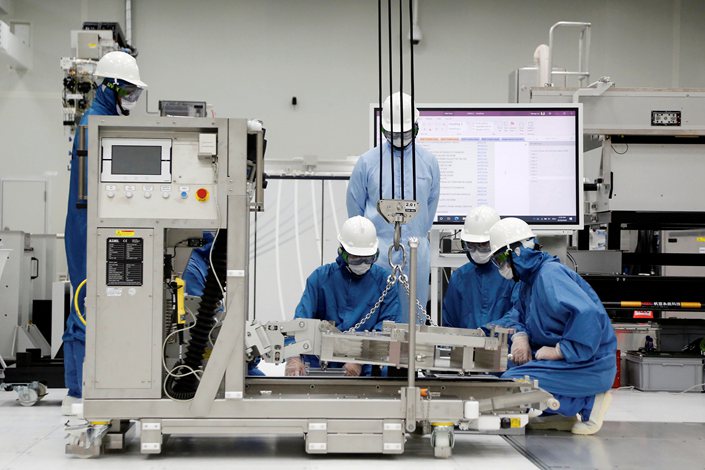 Trainees learn how to assemble and operate an EUV machine on Aug. 20 at an ASML training center in Taiwan.

As the U.S. tightens its grip on the sale of high-tech equipment to China, attention has turned to a struggling project in the Central Chinese city of Wuhan that the local government said owns the most cutting-edge equipment ever imported into the country.

Following the government’s admission that Wuhan Hongxin Semiconductor Manufacturing Co. Ltd. (HSMC) looks to be on the verge of collapse, there were widespread calls for the company to transfer its gear to another mainland chipmaker, to support the nation’s drive for chipmaking self-sufficiency.

The Wuhan government released a report in late July that said an advanced lithography machine, produced by Dutch firm ASML Holding N.V., had “entered (HSMC’s) factory.” The government also claimed that the unnamed machine was the only device on the mainland capable of making 7-nanometer chips. Currently, no mainland company has brought such advanced chips to market.

However, Caixin has discovered that the Wuhan government’s statements about HSMC’s machinery are misleading. The equipment in question is not the mainland’s only device capable of making 7-nanometer chips.

In the late July report, which has since been deleted, Wuhan announced that the ambitious HSMC project may never actually get off the ground.

After spending more than 15 billion yuan ($2.19 billion), and actual chip production still not yet underway, the project faces a cash shortfall of some 112 billion yuan, according to the government statement. The company is also facing legal problems related to the land use rights for its factory. The local government said the project could grind to a halt at any time if fresh investment was not forthcoming.

This proved to be somewhat stunning news to many, with some expressing their regret that another government-led semiconductor projects seemed to be approaching failure, destined to be a regrettable footnote in Beijing’s drive for self-sufficiency amid intensifying U.S. tech export restrictions.

Reports that HSMC’s gear had never been used and is now held by a local bank as a collateral on a loan only added to this sense of disappointment. There were widespread calls on China’s Weibo microblogging platform for the company to pass the equipment to another mainland chipmaker, amplifying the Wuhan government’s initial claims about the gear’s level of advancement.

However HSMC’s gear is just one of several imported machines capable of producing 7-nanometer chips, said an industry source with extensive experience in semiconductor manufacturing. For example, Shanghai-based contractor Semiconductor Manufacturing International Corp. (SMIC) owns around 10 of the machines in question, the source said.

According to a HSMC asset disclosure, the ASML machinery in question uses the deep ultraviolet lithography (DUVL) method in the chip production process. While DUVL technology is capable of 7-nanometer chip production, the most advanced chip manufacturing technology involves a process called extreme ultraviolet lithography (EUVL), which can make chips at 7 nanometers or smaller.

Dutch’s ASML is the world’s only manufacturer of such EUVL machinery. However, ASML had reportedly been under pressure from the U.S. to refrain from selling any EUVL machinery to China since 2018.