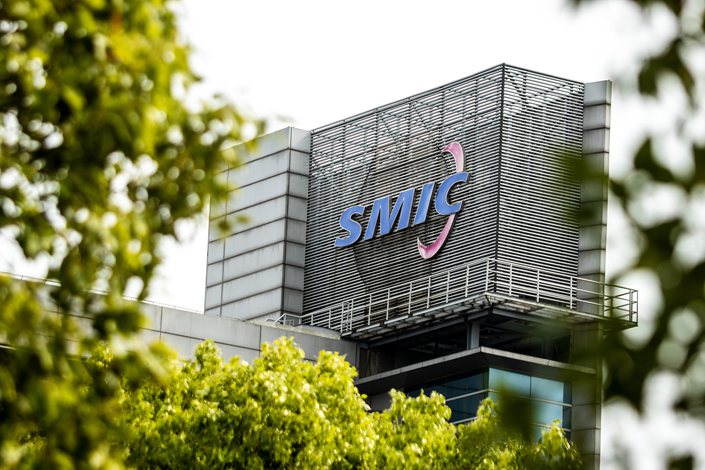 SMIC’s headquarters in Shanghai on May 14.

On Monday, SMIC closed down 22.9% in Hong Kong, while the company closed down 11.3% in Shanghai, wiping more than $5 billion off its market cap.

The sell-off followed media reports that Washington may put the company on the Commerce Department’s so-called “Entity List,” which would forbid U.S. companies from doing business with SMIC unless they obtain a government license.

Reuters first broke the news in a story published on Saturday, in which the news agency cited current and former U.S. officials who said the Trump administration was considering the move due to the firm’s alleged relationship to the Chinese military.

In response to the Reuters report, SMIC put out a statement on the same day, denying links to the Chinese military. The company “manufactures semiconductors and provides services solely for civilian and commercial end-users and end-uses … we have no relationship with the Chinese military,” the statement read.

SMIC said it is “open to sincere and transparent communication with the U.S. Government agencies in hope of resolving potential misunderstandings.”

If the U.S. government does target SMIC, it would deal yet another major blow to China’s effort to develop its own semiconductor industry.

The U.S. government has already placed dozens of Chinese technology companies on the “Entity List,” including Huawei Technologies Co. Ltd., which under the latest round of sanctions will be banned from buying semiconductors from any chipmaker in the world that uses U.S. technologies from later this month.

Without access to U.S. technology, SMIC’s chances of challenging industry leader Taiwan Semiconductor Manufacturing Co. Ltd. (TSMC) will grow even more remote. The Taiwan-based firm can mass produce 5-nanometer chips, compared to SMIC’s most advanced 14-nanometer chips. The Shanghai-based firm is thought to be at least three generations behind TSMC.

SMIC is now set to scale up its procurement expenditure and ramp up chip production after raising billions twice this year.

In July, SMIC raised more than 45 billion yuan ($6.5 billion) in its high-profile Shanghai IPO, which came just two months after it announced it had raised $2.2 billion from two state-owned funds.

SMIC’s has boosted its 2020 capital expenditure target to $6.7 billion, up from the $3.1 billion target it set early in the year, the company said in its second-quarter earnings report released last month.