By Yang Ge and Wei Yiyang 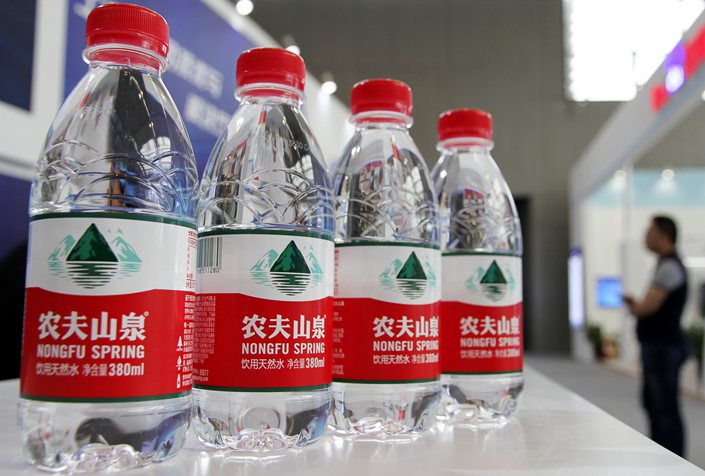 Nongfu raised HK$8.35 billion after pricing its shares at the top of their range for its Hong Kong IPO.

Shares of Nongfu Spring Co. Ltd., China’s leading seller of bottled water, debuted strongly in their first day of trading in Hong Kong, buoyed by a combination of strong demand and scarcity of new shares on offer.

The strong first-day performance also vaulted the company’s founder Zhong Shanshan into the ranks of China’s richest men. His 84.4% of the company post-IPO gave him a fortune worth about $40 billion, based on the company’s latest market value.

That was more than Alibaba Group Holding Ltd. founder Jack Ma, who was China’s richest man with a fortune worth $38.2 billion in Forbes’ latest list of China’s richest people published in November. Since then, however, Alibaba’s stock has risen around 50%, meaning Ma would almost certainly still be worth far more than Zhong based on Alibaba’s latest stock price.

Nongfu is a clear leader in China’s bottled water industry, and also a major player in its broader drinks sector. It was the biggest player in bottled water last year with 21% of the market, according to Frost & Sulllivan research cited in Nongfu’s prospectus. It was also the No. 3 player in the separate tea and juice products categories, as well as in functional beverages such as sports drinks.

Attesting to the offering’s popularity, the institutional portion of the IPO was oversubscribed by a factor of 60, while the smaller retail portion was oversubscribed by more than 1,100 times. The high oversubscription rate was magnified by the relative scarcity of shares available, since only about 3.5% of Nongfu’s total stock was offered.

Further magnifying the scarcity, nearly 30% of the shares on offer were sold to cornerstone investors including Fidelity Investments, Coatue Management LLC and Singapore’s GIC Pte. Ltd. Multiple institutional investors told Caixin the current stock price has been inflated by speculators. Nongfu’s current price-to-earnings ratio stands at 63, according to Bloomberg, or more than double the 24 ratio for global beverage giant Coca Cola Co. and also well above the ratio of 36 for leading Chinese brewer Tsingtao Brewery Co. Ltd.

“A Nongfu Spring share was worth HK$21.50 (at the IPO price), which has doubled, said one asset manager, speaking on condition of anonymity. “Can you imagine what the company will have to sell to create another Nongfu Spring.”

The listing also comes as another major company in the food and beverage space, Yum China Holdings Inc., prepares to make its own second listing in Hong Kong to complement its existing one in New York. Last week, Bloomberg reported that Yum China, which operates KFC and Pizza Hut restaurants in China, was telling prospective investors it plans to price its Hong Kong listing at HK$412 per share, putting it on course to raise HK$17.3 billion.