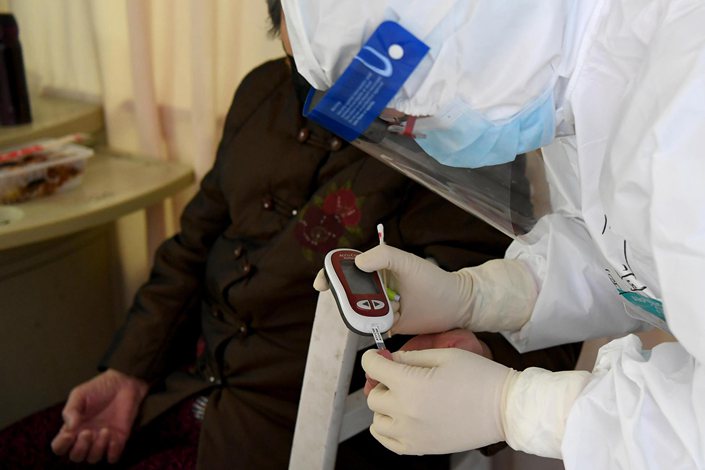 New research by Chinese scientists provides further evidence that the novel coronavirus can trigger diabetes in some people, one of the country’s top endocrinologists has said.

Scientists at Beijing Tongren Hospital found that some Covid-19 patients in China sustained organ damage that disrupted the production of insulin, the key hormone that regulates blood sugar levels, said Yang Jinkui, the head of the hospital’s endocrinology department, who was involved in the study.

The findings, which do not appear to have been formally published, tally with previous claims that some people have displayed diabetes symptoms after contracting Covid-19.

They raise the possibility that elevated blood sugar could be used to identify early-stage organ damage in Covid-19 patients, Yang said at a forum.

Speaking at the 2020 Peking University Diabetes Forum in Beijing last week, Yang said hospital researchers examined 130 people with Covid-19 in Wuhan, the Chinese city where the first cases were diagnosed. All of them had symptoms that doctors considered moderate to severe.

After excluding people with preexisting diabetes and chronic heart and kidney diseases, they were left with 69 cases, 16 of which were fatal.

By analyzing each person’s blood sugar levels, other body compounds and gender, they found a correlation between Covid-19 infection, organ damage and impaired insulin production, Yang said, adding that patients who died from the disease often saw a surge in blood sugar levels before they did so.

He said blood sugar and other indicators could be used soon after the onset of Covid-19 to predict the patient’s risk of death.

“Monitoring blood sugar is simple and easy to do, and the results can help clinical doctors to predict the risk of multiple organ damage,” he said. “They can then transfer the patient to intensive care in a timely manner for stronger treatment.”

Scientists have posited that the relationship between the novel coronavirus and a common protein may cause diabetes in some patients.

The protein, called angiotensin-converting enzyme 2 or ACE2, is a common cell surface receptor. Studies have shown the virus uses this kind of receptor on lung cells as a gateway to infect the respiratory system.

But ACE2 receptors also appear in other parts of the body, including the pancreas, where insulin is made. Their presence indicates the virus may also infect and damage other organs via a similar route.

Anecdotal evidence has indicated that some people who catch Covid-19 later experience symptoms of diabetes, which occurs when the body does not make enough insulin to control blood sugar levels.

Earlier this month, the peer-reviewed journal Nature Metabolism published the case of a 19-year-old man who developed insulin-dependent diabetes after contracting the virus.

In June, the New England Journal of Medicine, a top medical research repository, published a letter signed by a group of global diabetes experts saying that there was a “bidirectional relationship” between Covid-19 and the condition.

However, the experts added that much about the link remains “unclear,” including how frequently diabetes occurs in Covid-19 patients, whether they are at higher risk of diabetes complications, and whether Covid-19 worsens diabetes in people who already have it.