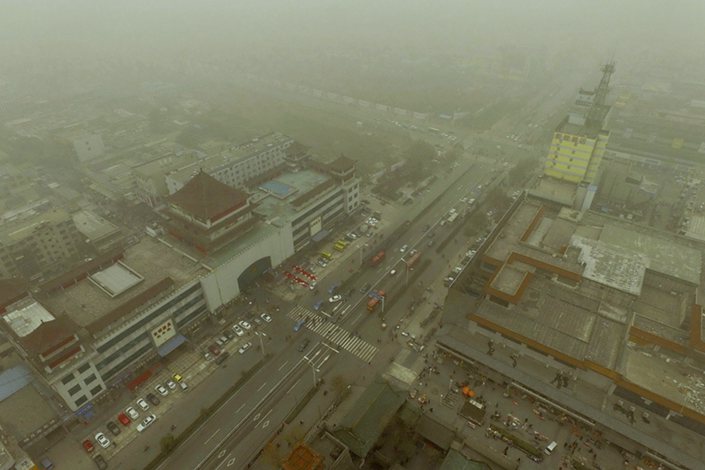 The two detentions raise questions about whether the local government engaged in excessive enforcement of air pollution prevention measures.

At 6 p.m. on July 18, Li Bingyue, a deputy head of Hebei Xingtai Iron and Steel Co. Ltd. was taken into police custody for five days of administrative detention. “It was the first time I had ever been in police custody in my 51 years, including 30 years working. I had never before been taken by the police for any investigation,” he told Caixin in an interview.

The detention came after Li refused to follow an order earlier that morning from the local government’s air pollution prevention and control office to shut down the plant’s sintering system, which was a major source of air pollution in Xingtai, North China’s Hebei province. According to local police, Li was detained for allegedly obstructing a state body from performing its duties.

The next day, one of Li’s colleagues, Xin Min, the 50-year-old deputy general manager of the steel company, was also taken away by local police for an inquiry about his alleged obstruction of the shutdown. She was subsequently punished with 10 days of detention. Later, the detention was suspended because of a health issue.

The two detentions raise questions about whether the local government engaged in overly excessive enforcement of air pollution prevention measures.

In the context of unprecedented attention to environmental governance and pollution prevention in China, neglection of environmental protection to boost economic growth has been effectively curbed. However, operational conflicts between companies and environmental supervision and law enforcement agencies are on the rise.

Xingtai, located on the indentation area of Taihang Mountain, has an average elevation of 60 meters and an average annual wind speed of 1.66 meters per second, which results in a temperature inversion layer and frequent haze. Coupled with the city’s reliance on heavy industry, its air quality has always ranked among the four worst cities in China since 2013.

On Jan. 17, the Xingtai municipal government issued a policy that put a renewed focus on controlling industrial pollution in the city, where 50 major emitters create 90% of the total industrial air pollutant emissions.

In February, the city’s environmental protection bureau pledged that if the city’s air quality remains among the bottom 10 nationwide, then the officials responsible, including members of the bureau’s leadership, would all have to resign.

In July, Qian Sanxiong, the city’s party chief, noted that the city was still under great pressure to achieve its goal, adding that anyone refusing to cooperate would be punished.

The conflict at the sintering machine site

With the strengthened enforcement of environmental laws, Xingtai Iron and Steel clashed several times with the local environmental agency this year. The recent detention of the two executives was preceded by a dispute over whether the company should shut down its sintering machine.

The air pollution prevention office of Xindu district, where the company is located, issued an emergency notice on the morning of July 18, stating that the company would have to shut down its sintering machine for at least 15 days.

On the morning of July 18, Zhang Yumin, director of the Xingtai City Ecological Environment Bureau’s Xindu district branch went to Xingtai Iron and Steel and requested that the sintering machine be shut down. The company informed Zhang of safety hazards associated with the shutdown; Xingtai Iron and Steel said that as long as the branch bureau acknowledged the risk of the shutdown, the company would immediately shut down the sintering machine and even suspend production. However, neither Zhang nor any of the environmental bureau staff acknowledged the hazards, stating that the emergency management bureau should be responsible for safety issues.

Li recalled that he received a call around 2 p.m. on July 18 from the workshop director, stating that law enforcement officers from the Xindu district bureau told him to shut down the sintering machine.

On the same day, around 6 p.m., the Qiaoxi district branch of the Xingtai Public Security Bureau took Li in for questioning. After four nights with investigators, he was sent to Xingtai’s police custody station on the July 22 for two more nights before being released on the morning of July 24. Xingtai Iron and Steel’s sintering machine was shut down in the early morning of July 19.

Liu Hongwei, Xingtai Iron and Steel’s general manager, stressed to Caixin that the company refused to shut down the sintering machine on July 18 because it was waiting for the government to acknowledge the risks of doing so. It only agreed to the shutdown after reporting the matter.

He stressed that frequently turning the sintering machine on and off poses a huge safety hazard. Xingtai Iron and Steel had only one blast furnace open at the time, and when there was no sintered ore, the factory would stop production, which would drop the pressure of Xingtai Iron and Steel’s gas system. The gas system requires positive pressure in accordance with safety regulations so no air can enter the system, as otherwise there is risk of an explosion.

He further noted that on Oct. 24, 2019, a fire broke out in the belt corridor of Hebei Xinghua Iron and Steel Co. Ltd’s sintering workshop in Wuan, a county-level city in Handan, Hebei province. Seven people died in the fire. According to a subsequent report by Hebei’s emergency management department, the cause of the fire was a restriction imposed by the environmental protection department. During the process of shutting down the sintering section, the high-temperature sintered mineral material caught a conveyor belt on fire.

On Aug. 7 this year, the person in charge of the Xingtai Emergency Management Bureau confirmed that insufficient sintering material can lead to the safety hazards that Xingtai Iron and Steel warned about, such as unstable pressure of the gas system. The city of Xingtai and Xindu district had both established an emergency consultation mechanism for production safety and environmental protection. There are documents clearly stating that production restrictions should not be imposed if they create a major safety hazard.

As of Aug. 10, Xingtai Iron and Steel’s sintering machine remained shut down.

Xingtai Iron and Steel is not the only company in the city that has been forced to shut down and limit production for exceeding emission thresholds. In July, Xindu district’s environmental watchdog issued an order for Xingtai Guotai Power Generation Co. Ltd. to correct its illegal conduct. However, the company appealed to the Hebei provincial government and the decision was later overturned.

Wang Zhixuan, vice chairman of the China Electricity Council, stated that the main problem now with pollution control and environmental management is that it is often a combination of specific and universal problems, law and administrative problems, and scientific and pseudo-scientific problems. He emphasized that in actual economic development, the key to solving environmental problems lies in administration based on law.