By Qin Jie and Guo Yingzhe 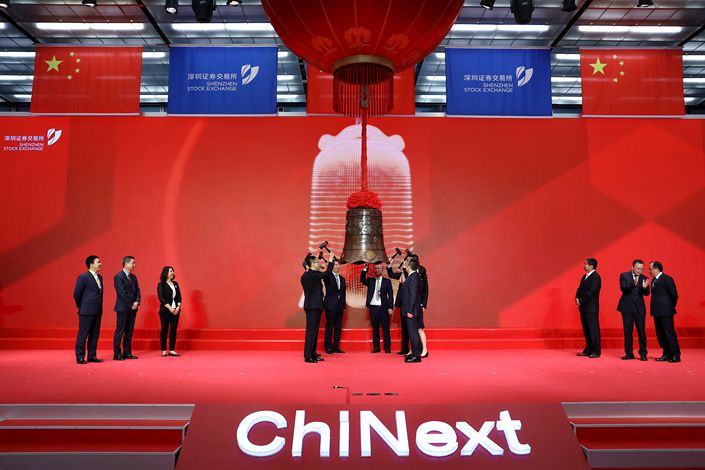 Some investors were peeved that FengShangShiJi shares had the temerity to fall below its IPO price and took to complaining on an online platform set up by the Shenzhen Stock Exchange.

A ChiNext stock has fallen below its IPO price.

That’s usually not news, but ever since the Shenzhen Stock Exchange began to welcome listings under a new registration-based IPO system on its Nasdaq-style board on Aug. 24, the prices of most newly listed stocks there have surged, with every one holding gains above their IPO prices. Until Wednesday, at least.

That’s the day shares of cultural services provider Beijing FengShangShiJi Culture Media Co. Ltd. closed below their offering price, making the stock the first listed on ChiNext to do so since the new IPO system was instituted. FengShangShiJi shares closed at 133.43 yuan ($19.50) on Wednesday, below its IPO price of 138.02 yuan.

The price drop is a notable milestone for ChiNext as shares listed there under the new registration-based IPO system had begun to develop an air of invincibility. Stock buyers might cheer, but it’s not a great sign for regulators that want to keep speculators from running rampant as China tries out a looser, more market-driven system for conducting IPOs.

The registration-based system involves less red tape than the old approval-based system that’s still in use on the main boards of the Shanghai and Shenzhen stock exchanges, as well as Shenzhen’s SME board. The new system, which also applies to Shanghai’s STAR Market, eases limits on daily price movements of stocks, and even imposes no limits at all in their first five days of trading.

Some investors were peeved that FengShangShiJi shares had the temerity to fall below its IPO price and took to complaining on an online platform set up by the Shenzhen Stock Exchange.

Chinese investors generally like buying newly listed stocks because of the common expectation that share prices usually go up in their first few days of trading. There is evidence for this belief. Since Aug. 24, when the first batch of 18 companies went public under ChiNext’s new registration-based system, the share price of every single one rose on the first day of trading, and one went on to close over 10 times higher.

Investors only have a slight chance of getting their hands on pre-IPO shares because demand is so large for subscriptions. Many go on to sell their shares after the initial jump in the first trading days, which results in a decline in prices afterward.

Still, some see the unfailing opening surges as a sign that something is amiss. “There has been wild speculation in new stocks,” Dong Dengxin, director of the Finance and Securities Institute at Wuhan University of Science and Technology, said in an opinion piece (link in Chinese) published earlier this week.

Dong pointed out that many stocks fell below their IPO prices in Hong Kong and the U.S. on their first day of trading.

Although many newly listed ChiNext stocks have lost some of their momentum, investors remain enthusiastic about the board. Tuesday, nearly 340 billion yuan worth of shares changed hands on ChiNext, the first time ever that it had a higher turnover than the whole of the Shanghai Stock Exchange.

Since late August, trading of several ChiNext stocks has been suspended on signs of abnormal speculative activity, according to the Shenzhen bourse.

As part of reforms to Shenzhen’s IPO system, financial regulators have allowed stocks on the ChiNext board to rise or fall up to 20% a day starting in late August, up from the previous 10% limit. And there are no limits on daily price changes for new listings in their first five trading days.