By Anniek Bao and Bao Xue 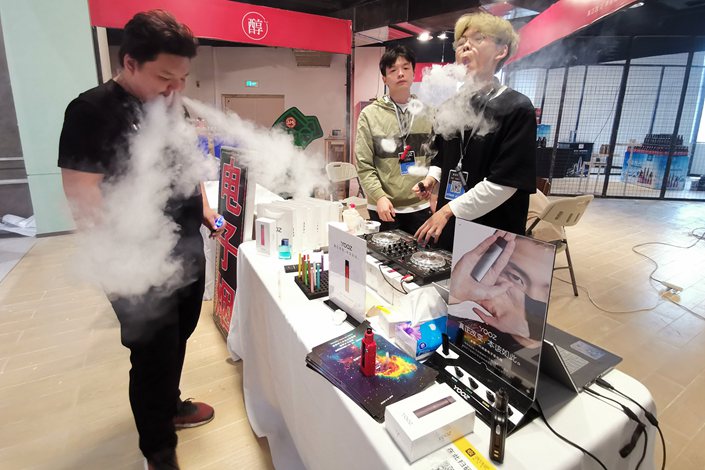 An salesman sells e-cigarettes at a shopping mall in Wuhan, Capital of Central China's Hubei province, on May 2, 2019.

China’s tobacco regulator has just concluded a two-month blitz on the e-cigarette market, which took aim at illicit online marketing and sales to minors.

E-cigarettes have repeatedly come into the regulatory crosshairs in China, as authorities sought to restrict how they can be sold based on concerns over their potential health impact and use by under-18s. Eye-catching designs and flavors have been blamed for a spike in young nonsmokers taking up the devices.

The State Tobacco Monopoly Administration (STMA) and the State Administration for Market Regulation jointly said Wednesday they had removed over 23,000 videos and links promoting the products from the internet and shuttered almost 5,000 sales platforms.

They also said they had inspected over 34,000 bricks-and-mortar shops and vending machines offering e- cigarette products, with a focus on areas in which minors gather, such as around schools. As part of the campaign, 136 e-cigarette and internet firms promised to establish a self-regulatory mechanism to combat online sale of the products, which was effectively banned late last year.

All physical shops are required to “adopt effective age verification measures to avoid minor purchases,” according to a statement jointly issued by the regulators in July.

However on Friday, Caixin visited six e-cigarette shops and one street vendor around Beijing’s Sanlitun shopping and nightlife area. While all displayed notices the products were for adults, none of them requested to see ID from the 23-year-old reporter.

“If you are under 18, you can get someone else to buy on your behalf,” one staff member said. “Or find a seller on WeChat, they normally won’t ask for your age.”

Relx Technology, one of China’s biggest e-cigarette brands, has rolled out a “guardianship project” that requires vendors to check buyers’ ID before selling. Customers will be asked to register with their real names, ID and pass a facial recognition system on Relx’s WeChat account to verify their age when making purchases.

Nick Lee, owner of a Relx’s franchise store in Fuzhou, East China’s Fujian province, said while this system is effective at preventing official Relx vendors from selling to minors, “the effects are limited with online retailers and unauthorized vendors that are less regulated.”

The vaping rate is higher for those between the ages of 15 and 24 than among any other age group, according to a report from the official Xinhua News Agency, and around 45.4% of e-cigarettes were purchased online last year.

In November, Caixin revealed that STMA, which oversees and shares staff and offices with the state-owned China National Tobacco Corp., the world’s largest tobacco company by sales, was weighing a ban on most brick-and-mortar stores selling e-cigarettes.