By Sun Liangzi and Mo Yelin 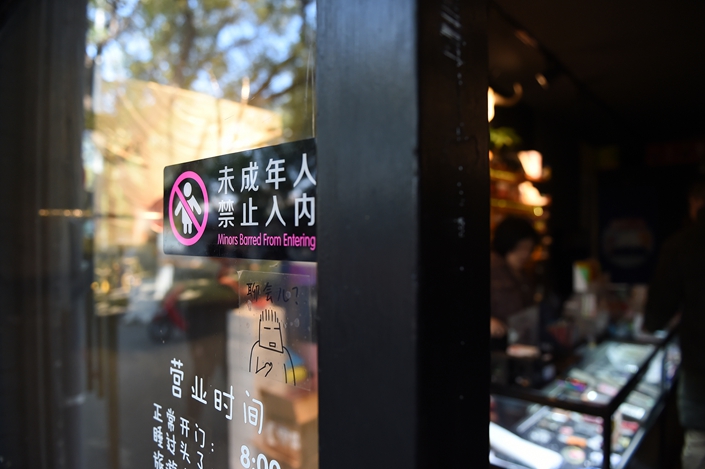 A sign on the door of an e-cigarette store in Beijing reads "Minors Barred From Entering" on Nov. 8. Photo: VCG

China’s powerful tobacco regulator is weighing whether to stop local authorities from banning the sale of e-cigarettes in brick-and-mortar stores — except for those near schools.

The unreleased policy from the State Tobacco Monopoly Administration (STMA), which oversees, and shares staff and offices with, China National Tobacco Corp., the world’s largest tobacco company by sales, would come even after the body banned all online sales of e-cigarettes earlier this month.

The plan to enshrine the right of vendors to continue to sell the products, which would be at odds with decisions some regions have already taken, was discussed at a recent meeting of the STMA, Caixin learned from multiple regulatory sources who requested anonymity.

On Nov. 1, Chinese acted on global concerns about the potential harm caused by e-cigarettes by issuing a blanket ban on their online sale, as part of efforts to prevent the addictive products falling into the hands of children. The STMA also banned e-cigarette companies from advertising their products online.

As of Monday, the country’s major e-commerce platforms including Alibaba, JD.com and Pinduoduo had all removed the e-cigarette products from their sites.

Those restrictions have also partly rolled into brick-and-mortar retail. On Nov. 5, the regulator launched a national clearing campaign targeting vendors of e-cigarettes located near middle and high schools.

The unreleased STMA policy would put the central regulator at odds with policies adopted by local authorities in some parts of the country. Provinces including Shandong, Jiangxi and Gansu have all imposed strict rules on offline sales of e-cigarettes, industry sources told Caixin on the condition they were not identified.

In cities including Nanjing, Chongqing, Chengdu and Nanning, authorities have expanded their campaign to target sellers that are not running stores located near a school. Many have introduced complete sales bans at tobacco distribution sites such as convenience stores.

Preventing such a sales ban from expanding offline could prove good news for China’s vaping industry, which saw sales surge more than 70% to 33.75 billion yuan ($4.8 billion) in 2018 from 19.7 billion yuan in 2017, according to the Electronic Cigarette Industry Committee of the China Electronics Chamber of Commerce.

But e-cigarettes have been clouded in scandal after the U.S. Centers for Disease Control and Prevention linked 39 deaths and 2,051 cases of lung disease to their use. Eye-catching designs and flavors like raspberry cheesecake have been blamed for a spike in young nonsmokers taking up the devices, which were originally touted as a way to quit smoking.

Production bases in the southern Chinese city of Shenzhen make 90% of the world’s e-cigarettes, most of which are exported.