Four Things to Know About the Comprehensive China-EU Investment Agreement 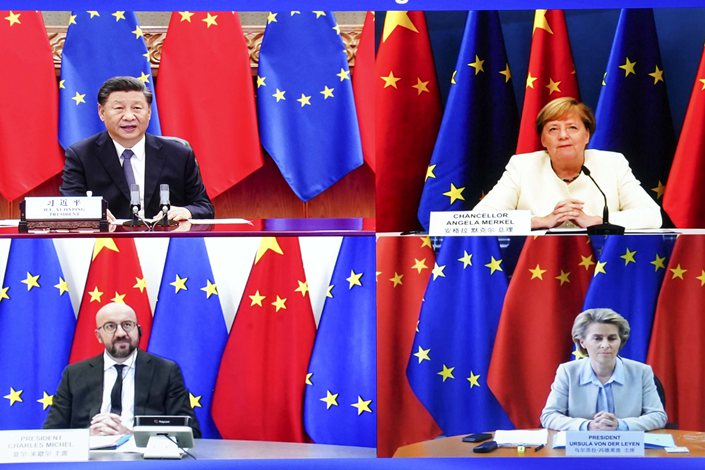 In an “open, constructive and tense” virtual summit Monday, Chinese and European leaders reaffirmed their goal to finish a bilateral investment agreement by the end of the year. The EU, particularly, pressed China on reciprocity, market opening and fair competition. But a huge gap remains between the two sides.

What is the China-EU Comprehensive Agreement on Investment?

The China-EU Comprehensive Agreement on Investment is a bilateral investment treaty that primarily aims to provide greater market access, reduce barriers to investment, and regulate competition and labor standards. Because the European market is more open than China’s, the negotiations are more about the EU pressing China to make concessions on opening up its market, allowing European companies to invest in the country more easily.

China and the EU decided to begin formal negotiations on the investment agreement during a 2013 summit in Beijing between Li Keqiang, China’s premier, and Jose Manuel Barroso, then the president of the European Commission, which serves as the EU’s executive branch. Since then, the two sides have held 31 rounds of talks.

Once concluded, the agreement would have to be ratified by all EU member states before it could come into force.

Why have China and the EU set the deadline to finish negotiations by end of this year?

Negotiations have been going on for six years. As the Covid-19 pandemic wreaks havoc on global trade and the economy, Beijing and Brussels feel it’s now necessary to make a push to conclude the agreement to “jointly promote” bilateral investment and job creation.

For China, particularly, it urgently needs the agreement so it can begin dealing with a united Europe on investment, rather than individual member states, to offset losses caused by the costly trade war and ongoing decoupling with the United States. A diplomatic win wouldn’t hurt either.

China is also under pressure because it is counting on German Chancellor Angela Merkel as an ally to push for the agreement. Merkel is currently chairing the rotating presidency of the EU, but only for the remainder of the year. With her clout in European politics, she could help China get the agreement passed by the EU’s member states. But she won’t be around for much longer. Merkel has announced she will retire next year.

What are the EU’s key demands?

In general, Brussels wants reciprocal market access from China and fair competition in the Chinese market. “We are really serious about having access to the Chinese market and tearing down the barriers,” said Ursula von der Leyen, president of the European Commission.

The European side has succeeded in getting its Chinese counterparts to address three of its concerns about the investment accord: the behavior of state-owned enterprises, forced technology transfers and transparency in government subsidies.

The two sides still have significant differences in two areas in particular: market access and sustainable development. Von der Leyen complained that “European investors face too many barriers in key sectors in China,” such as telecommunications, computers, new energy and transportation.

For example, Joerg Wuttke, president of the European Chamber of Commerce in China, said that hospitals in China’s southern Guangdong province were told to buy domestic brands, excluding products from joint ventures established by European companies in China.

Wuttke also said that “the hardest part” is the European demand for China to adopt International Labor Organization rules that deal with trade unions and forced labor.

Will they achieve the goal by year’s end?

Although Chinese and European leaders are politically willing to meet the year-end deadline, negotiations could still continue into next year or beyond due to the huge gap in their negotiating positions.

The European side remains cautious and is also testing Beijing’s limits on concessions. “If we are to achieve our shared objective of finalizing negotiations this year, China has to convince us that it is worth having an investment agreement,” Von de Leyen said.

With three months left before the deadline, the ball is in China’s court.