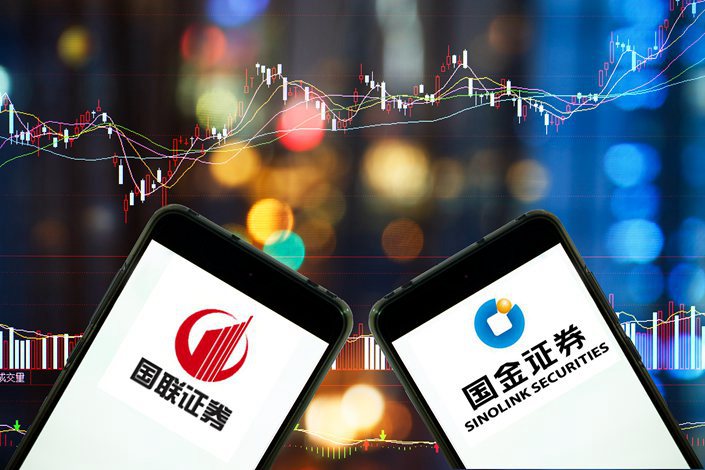 China has almost 100 brokerages, but the majority are small, regional outfits.

A small Chinese brokerage that only listed in Shanghai in July is buying up a bigger securities firm, the first publicly announced deal in an expected wave of consolidation as the industry gears up to compete with international investment banks such as Goldman Sachs Group Inc. and UBS AG after the government opened up the market to foreign companies.

Shanghai and Hong Kong-listed Guolian Securities Co. Ltd. and Shanghai-listed Sinolink Securities Co. Ltd. announced the proposed tie-up in separate statements (link in Chinese) on Sunday. State-owned Guolian, which is ultimately owned by the Wuxi government, will buy a 7.8% stake in Sinolink from its privately owned controller and pay for the remainder through an A-share swap, according to filings released by the two companies. No pricing details were given.

The deal, which needs regulatory approval, will propel the merged company into the list of the top 10 brokerages in China. Guolian is currently 55th in a ranking of 98 brokerages tracked (link in Chinese) by the government-backed Securities Association of China (SAC), with assets of 27.3 billion yuan ($4 billion), while Sinolink is 33rd with 46.9 billion yuan.

Trading in the shares of both companies was suspended on Monday and will remain suspended for up to 10 trading days, as the deal is still in its early stages and there are still many uncertainties, the filings said. The Shanghai-listed shares of both companies surged by the 10% daily limit on Friday as rumors of the merger spread through the market.

As well as opening the securities market to overseas institutions, the government is also preparing to break down decades-old barriers between domestic banks and brokerages by granting securities licenses to some of the country’s biggest lenders.

There have been persistent rumors that China’s two largest brokerages, Citic Group and CSC Financial Co., plan to merge, although both have denied the reports.

Founded in 1999, Guolian is ultimately owned by the State-owned Assets Supervision and Administration Commission (SASAC) of Wuxi, a city in East China’s Jiangsu province, through a series of holdings by local state-owned enterprises. Wuxi Guolian Development (Group) Co. Ltd. is the biggest shareholder with a 22.87% stake. The brokerage was one of the first to get a license from domestic regulators to conduct mutual fund investment advisory services in the country. The firm reported 1.6 billion yuan in revenue last year, ranking 51st among the 98 brokers tracked by the SAC.

In addition to Sinolink, which has subsidiaries that include a futures brokerage and a fund management company, Yongjin owns Yunnan International Trust Co. Ltd., a trust company based in southwest China involved in asset management, investment banking, trust, and financial consulting services to institutional investors, according to its website. IPOs underwritten by Sinolink so far this year have raised a total of 13.6 billion yuan, the sixth highest of all domestic brokerages.

Under the terms of the agreement, Guolian will buy a 7.8% stake in Sinolink from the latter’s largest shareholder, Changsha Yongjin. Although no information about price was disclosed in the filings, sources with knowledge of the matter told Caixin that the two sides have agreed that it will be the equivalent of no less than 90% of the market price. That would be valued at about 3 billion yuan, based on Sinolink’s closing price on Friday, according to Caixin’s calculations.