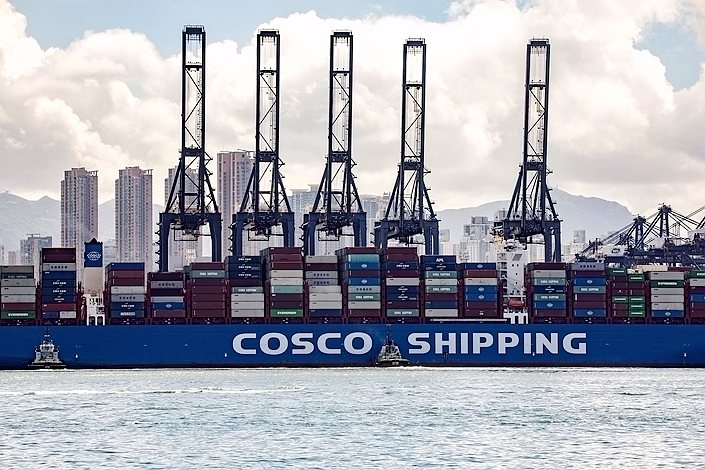 A container ship operated by Cosco sits at the Kwai Tsing Container Terminal in Hong Kong on July 27.

Ocean shipping rates between China and the U.S. are showing signs of peaking near record highs, following recent government intervention on both sides of the Pacific and operator commitments to boost capacity.

China’s Ministry of Transport called major domestic and international shippers to a closed-door meeting on Sept. 11 to discuss the situation, which had seen U.S.-China shipping prices soar to their highest levels on record over the last three months, a source familiar with that situation told Caixin. The U.S. Federal Maritime Commission (FMC) called a similar meeting five days later, according to an announcement on its website.

Before those meetings, both the FMC and China’s Transport Ministry had issued letters to relevant companies in mid-August inquiring about the situation.

The FMC said the topic of its Sept. 16 meeting was “market trends in trade lanes serving the United States and actions taken by both individual ocean carriers and global alliances in response to Covid-19 and related impacts to the shipping industry.” It said it was “actively monitoring” the situation with a focus on freight rates and transportation service levels.

“If there is any indication of carrier behavior that might violate the competition standards in section 6(g) of the Shipping Act, the Commission will immediately seek to address these concerns with the carriers,” it said. “If necessary, the FMC will go to federal court to seek an injunction to enjoin further operation of the non-compliant alliance agreement.”

Amid the government meetings, the shippers have begun taking action to add capacity on their trans-Pacific and other routes, large amounts of which were taken offline during the global pandemic that put a huge damper on demand earlier this year.

Danish shipping giant Maersk also previously announced it was resuming all of its previously canceled trans-Pacific routes to both the U.S. and Latin America following a sharp rise in shipping demand over the last two months, especially on U.S.-China routes. It added it was reactivating idled capacity and renting more containers to meet demand.

Prices have begun to moderate as more capacity comes on stream. On Sept. 18 the cost of shipping a 40-foot container to the U.S. west coast was averaging $3,867, up a modest 1.4% from the previous week and marking the second consecutive week of increases below 2%.

Most of the world’s major shipping lines sharply reduced their operations starting back in February when demand dropped sharply as the pandemic was peaking in China and later spread to the rest of the world. At the end of May, the amount of idle capacity reached a record high with 550 ships anchored in ports. Prices began to rise at that time, prompting companies to gradually put capacity back on stream starting in the third quarter.

But the reintroduction of capacity wasn’t enough to stop a sharp price spike, which ultimately led to the government intervention. Data from the Shanghai Shipping Exchange showed that fees to send a 40-foot container from China to the U.S. west coast had more than doubled year-on-year to around $3,900 as of mid-September. Sending a container to the U.S. east coast cost as much as $4,700.