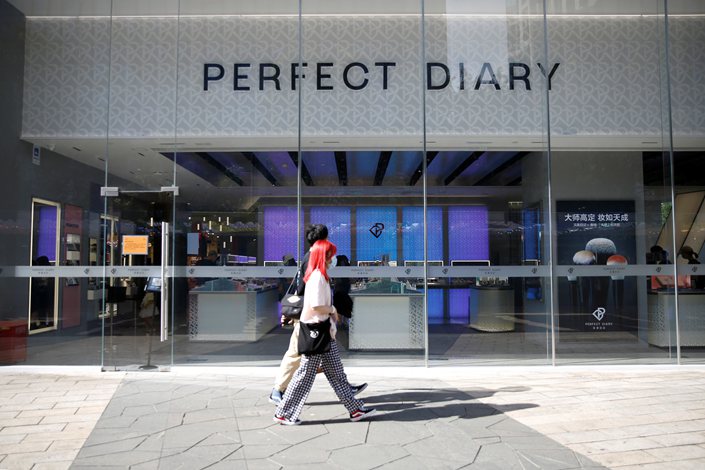 Pedestrians walk past a store of cosmetics brand Perfect Diary in Beijing on Aug. 25.

Guangzhou Yatsen E-Commerce Co. Ltd., which operates budget cosmetics brand Perfect Diary, is eyeing a U.S. IPO as soon as next year, according to two people close to the deal.

The company, which courts younger consumers with cosmetics priced far below the international brands favored by older shoppers with fatter wallets, recently closed a funding round that left it with a valuation of $4 billion, up from $2.5 billion in its previous fundraising in April.

Around the time of that fundraising, Guangzhou-based Yatsen denied rumors it was planning to list.

In August, Yatsen had a 5.19% share of cosmetic sales on Alibaba Group Holding Ltd.’s online retail platform Tmall, which recorded 32.2% growth in makeup sales that month to 3.68 billion yuan ($542 million), according to a report from Shenwan Hongyuan Securities Co. Ltd. That was despite Yatsen’s sales declining for four consecutive months from May to August.

Last September, the company was China’s No. 2 cosmetics-maker with a 2.7% overall market share, putting its just behind Canada’s Mac Cosmetics, which had a 2.8% share.

Yatsen has concentrated on social media marketing for Perfect Diary, especially on Alibaba-backed lifestyle and beauty social media platform Xiaohongshu. Since the brand was founded in 2017, Yatsen has poured resources into partnering with influential users on the platform, known as “key opinion leaders,” to become one of the most prominent brands on Xiaohongshu, an investor told Caixin.

As it scrapes its head on the ceiling of the online market, Perfect Diary has also increasingly made forays into brick-and-mortar retailing to broaden its revenue streams. It now has some 150 physical stores. Perfect Diary’s retail chief Feng Qiyao told Caixin in an interview September, “the company is aiming to turn all physical business (profitable) this year.”