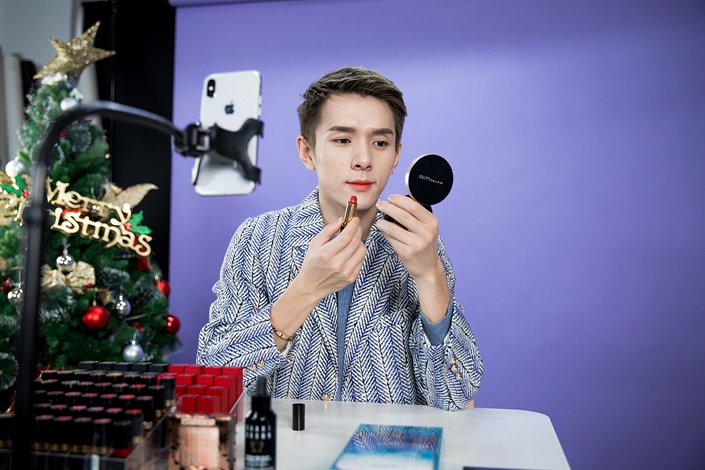 Li Jiaqi tries on lipstick during a live broadcast in Shanghai in January 2018. Photo: VCG

E-commerce billionaire and Alibaba founder Jack Ma isn’t used to losing, but that’s exactly what happened one day last year. The date was the day before Nov. 11, known as Single’s Day in China, which Alibaba has transformed over the last decade into a shopping extravaganza even bigger than Black Friday in the U.S.

A livestreamed evening party organized by Alibaba’s Tmall that day featured Ma competing with Li Jiaqi, one of China’s hottest online celebrities known for his beauty advice, to see who could sell the most lipsticks. The contest wasn’t even close. Ma managed to sell just about 10 lipsticks during the show, while Li ticked up almost a thousand sales in just a few minutes.

Now in his 20s, Li has risen from his roots working in a brick-and-mortar cosmetics shop to create an online empire that includes short videos and other products offering beauty product reviews and recommendations. Getting his endorsement has become a gold standard in China’s cosmetics world, often causing products to run out of stock.

Known in the industry as “key opinion leaders” or KOL, people like Li have become a hot commodity on China’s internet, especially in the e-commerce realm that has become the marketplace of choice for the nation’s millions of young consumers. The minting of such celebrities has become a primary goal of multi-channel network (MCN) agencies, which can then reap big money by acting as agents for the talent they cultivate.

Heavily trafficked sites have been working hard to unite such stars with brand owners on their platforms, aiming to create e-commerce sales opportunities. But just like in Hollywood, industry insiders are realizing that duplicating the commercial success of someone like Li isn’t so easy.

Such celebrities are attractive to advertisers because sales can be easily measured, and such promotion is also less prone to manipulation. But it still faces problems, including an increasingly crowded field of talent and celebrity imposters that use fake engagement to sell themselves to agents.

Li’s explosion was closely tied to support from Chinese social platforms. One of those saw Alibaba leverage its marketing resources to promote him as a “lipstick queen.” But his big break came from Douyin, China’s most popular short video app that uses the TikTok name in other markets.

Li published his first video on Douyin last December, and turned it into a daily program shortly afterwards. On Jan. 24, he rocketed on leading search engine Baidu from 0 to 3,706 in terms of search index, which tracks the number of internet domains where searches for a particular term originate. It continued to grow to a peak of 24,080 on May 12, and eventually stabilized at around 5,000 per day.

One lipstick Li recommended sold a record 150,000 during one online shopping campaign, and his advertising fees are now higher than some movie stars.

A 10-minute broadcast featuring Li on Taobao’s livestreaming platform now costs 100,000 yuan ($14,164) for lipstick products, 60,000 yuan for other cosmetics or personal care products and 30,000 for food, according to a rate card obtained by Caixin. A 15-second short video for his Douyin program is even steeper at 500,000 yuan, while a 60-second promotion costs 1.2 million yuan.

Li’s soaring costs have left room for the emergence of a rich B-list of livestreaming celebrities who have smaller fan bases but may offer better bang for the buck. Wang Anning, CEO of the Guyu brand of skincare products on Tmall, said alignment between a celebrity’s fan base and the brand’s target consumers is the best factor for choosing such talent.

Cosmetic sellers are the biggest users of such online celebrities, known locally as “wanghong,” according to Wang. Such brands can spend 40% of their marketing budget on livestreaming promotion, and pay about 20% of their product sales as commission for agents. By comparison, apparel merchants pay a much smaller 4% commission, he said.

But while Li’s success has been huge, creating similar online celebrities has proven more problematic. Many insiders and analysts believe it would be extremely difficult to create another Li without a new platform, much the way that a young Douyin was responsible for Li’s rise to fame.

Platforms themselves have also benefited from the opportunities created by the rise of product-peddling online celebrities.

A livestreaming bar launched just three years ago on the mobile app of Alibaba’s Taobao, an equivalent of eBay, has become the second largest entry point for user traffic after the search bar, an employee told Caixin. At its investor day last September, Alibaba said monthly active users of its livestreaming section doubled in the second quarter of 2018, while shopping turnover rose 350%.

Other platforms with strong traffic or celebrity users have also tested the waters for cashing in on the online celebrity trend over the last year. In addition to top players like Douyin, Kuaishou and Weibo — China’s equivalent of Twitter — others such as Xiaohongshu and Nasdaq-listed Bilibili have also joined the game.

As promoting through such online celebrities has become more common among e-commerce retailers, merchants have become burdened with growing costs for gaining attention in a crowded marketplace.

Fake user engagement data, a common problem in China, has also become a headache for agents trying to figure out who is really popular. Such faked data is one reason why big traffic on some platforms may not translate into deals, said Wang Qi, chairman of a Zhejiang clothing manufacturer that supplies items promoted in live-streaming.

Almost every part of the Chinese internet that relies on mass user engagement has developed a shadow ecosystem of fake engagement vendors and buyers, a Caixin investigative report found.

Traffic-inflators can produce fake accounts able to more closely mimic a real user’s behavior to boast the popularity of an account. On Douyin, for example, one can buy “near-real followers” at the cost of about 400 yuan per 1,000. The price can be as low as 10 yuan per 10,000 fake “zombie” followers on Weibo, one fake-account vendor told Caixin.