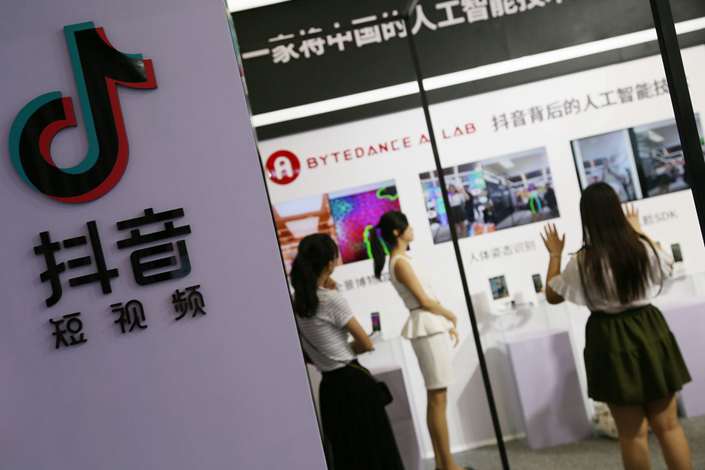 One would almost never know that he is the 35-year-old billionaire founder of China’s fastest-growing internet company and the world’s most valuable startup, ByteDance Ltd. Zhang ranks No. 25 on the Forbes China Rich list with a $6.8 billion fortune.

Just two weeks ago, ByteDance, the company behind news aggregator app Toutiao and short-video platform Douyin, completed a financing round that valued it at a record $75 billion, surpassing Uber’s $72 billion.

ByteDance has launched numerous apps since Zhang founded it in 2012, including Toutiao, the video platforms Douyin and Xigua, and even a car information app, Dongchedi. The company’s products occupy an increasing chunk of the average Chinese mobile-internet user’s time online — around 10%, roughly the same as for e-commerce giant Alibaba Group Holding Ltd. Tencent Holdings Ltd., which owns the multi-function messaging and payment app WeChat, accounted for around 47% as of June this year, according to app data firm Questmobile.

ByteDance’s most recent valuation is a big jump from $10 billion in late 2016. That’s thanks in part to investors impressed with the company’s revenue growth, a person close to ByteDance told Caixin. Revenues doubled from less than 10 billion yuan ($1.44 billion) in 2016 to more than 20 billion yuan in 2017.

Along the way, the tech upstart has stepped on the toes of some of China’s largest internet companies. Its Douyin app has been the target of a regulatory crackdown on the short-video sector, while Toutiao, which recommends news articles using an artificial intelligence algorithm, has faced accusations of plagiarism and poor editorial judgment.

Zhang started ByteDance at the 2012 height of China’s mobile internet boom. By June of that year, the number of mobile internet users in the country reached 388 million.

In August 2012, Zhang launched Toutiao, the news app. At around the same time, Tencent rolled out the WeChat official account function, which allowed the app’s users to follow content-producing accounts that were essentially mobile-internet versions of blogs.

China’s dominant search engine, Baidu, sensed a threat from these two developments. For the first time, Chinese information services were subverting the traditional model of users searching for information, and instead creating information that “searched” through AI or other means to be delivered to users.

But Baidu lagged behind Toutiao, partly because most Baidu users access its services through mobile and desktop browsers rather than apps, making it difficult to follow individual users’ habits and customize recommendations over the long term. In October 2017, Baidu said its information-stream revenue in the first three quarters that year amounted to around $1 billion. By then, Toutiao was already generating nearly double that amount, mostly from advertisements embedded in its news feeds.

Douyin launched in 2016 as just one of many Chinese short-video apps. But it rose to prominence more than a year later, during the 2018 lunar New Year holiday. With its Spring Festival campaign, which included airport advertisements targeting young working people traveling home for the holiday, the daily active user base more than doubled from 30 million to nearly 70 million.

Douyin’s popularity pushed up ByteDance’s share of mobile internet users’ time, briefly becoming second only to Tencent, which owns China’s most time-consuming app, WeChat. The rivalry between Tencent and ByteDance resulted in a public spat in May between Tencent founder Pony Ma and ByteDance’s Zhang — on the two men’s WeChat Moments. In June, ByteDance complained that WeChat blocked links to Douyin and other ByteDance apps on false claims of “inappropriate content,” prompting a series of lawsuits by the two companies against each other.

Douyin has stood out among China’s many short-video apps thanks to its vertical video format and automatic scrolling function, as well as its popular built-in special effects, which include a “beautifying” filter. One hedge fund investor told Caixin of a popular Douyin video blogger who shocked fans after posting an unfiltered video on Weibo.

“The face was larger by one size,” the investor said. “How could this have been the same person?”

By October, Douyin had amassed around 200 million active users, surpassing rival Kuaishou’s 130 million. But it’s unclear how long Douyin’s popularity will last. The app could see a drop in user numbers once its novelty fades, especially since it incorporates little social contact, a source working at a private equity fund with experience in the internet industry told Caixin. ByteDance has recently introduced other functions on Douyin, including online shopping, in a bid to address such concerns and increase user “stickiness.”

At the same time, ByteDance is hoping to expand into the longer-format video market through Xigua Video, which was launched under the name Toutiao Video in 2016. In October, Xigua Video released a list of the films it intended to offer audiences over the course of the next year, including nine original variety shows.

Among China’s trio of internet giants ― Baidu, Alibaba and Tencent, popularly referred to as “BAT” — ByteDance does appear to have one ally in e-commerce pioneer Alibaba.

Yunfeng Capital, led by Alibaba founder Jack Ma, participated in ByteDance’s latest financing round. ByteDance is also in an advertising partnership with Alibaba that involves its short-video apps redirecting users to the Alibaba e-commerce platforms Taobao and Tmall.

But ByteDance isn’t content with merely redirecting shoppers. In September, it unveiled Zhidian, a bargain-hunting app with price points similar to those of fellow e-commerce upstart Pinduoduo, which listed on Nasdaq in July. Zhidian’s home page proudly highlights its policy of free delivery with a minimum purchase of just 9.90 yuan ($1.42).

Douyin and Xigua Video have also begun offering users an opportunity to sell directly to viewers, for a fee. One popular user, Qiaofu9mei, sold 4 million kilograms (8.8 million pounds) of fruit through her short videos over the past year, earning 5 million yuan, an operations manager at Xigua Video told Caixin. But it remains to be seen whether ByteDance can replicate its online success in the world of e-commerce, which combines online infrastructure with offline supply chains.

ByteDance’s ambitions extend beyond the Chinese market. It’s already a major player in Japan, where it recently sponsored a new TV drama starring popular actress Yui Aragaki, and has advertised on billboards in downtown Tokyo.

In the first quarter of 2018, Tik Tok (the international version of Douyin) had more than 10 million monthly users in Japan — nearly a tenth of the country’s population. The app’s download volume and user base growth in the country have doubled in the past six months, Masaki Nishida, deputy director of Tik Tok Japan, told Caixin.

Chinese internet companies rarely make such inroads in Japan, which has a reputation for being an insular tech market. Tik Tok is also expanding into Thailand and Vietnam, while ByteDance’s Musical.ly has a presence in North America and Europe.

ByteDance is betting heavily on the international market for future growth. It has acquired North America-based apps Musical.ly and Flipagram. The company’s overseas products cover more than 40 countries and are offered in 75 languages, according to ByteDance.

The startup is focusing especially on countries with large populations, such as India. Toutiao invested in the Indian news platform Dailyhunt in 2016. It also launched its own application, Helo, which targets rural audiences by offering versions in a large number of local dialects.

Qian Tong and Takehiro Masutomo contributed to this report.