Why Faking Engagement on Short-Video Apps Is Pricey 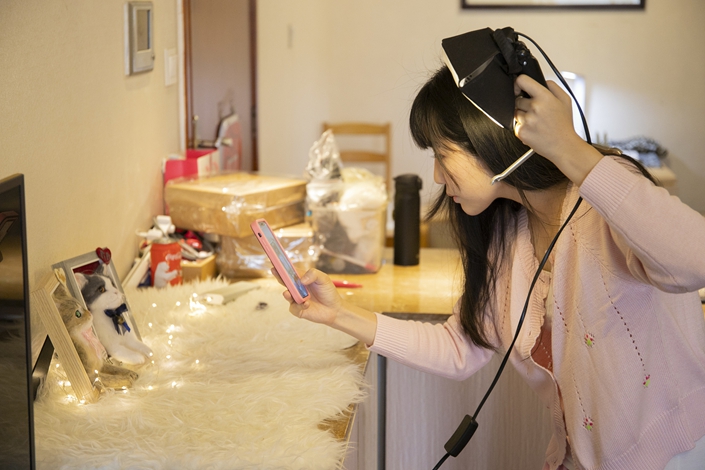 A woman creates a short video with her phone in Guangzhou, on March 26, 2019. Photo: VCG

(Beijing) — The latest platforms to become wildly popular — short video apps — are increasingly getting drawn into the murky fake traffic industry and changing how the underground business operates.

Just about every part of the Chinese internet that relies on mass user engagement has developed a shadow ecosystem of fake engagement vendors and buyers.

Why fake traffic? In a word: cash. If an account has a lot of highly-engaged followers, this can translate into vast amounts of advertising revenue, investment and even direct sales.

According to a report conducted by marketing consulting firms Miaozhen Systems and AdMasters, 81% of the advertisers polled — including both Chinese companies and foreign firms operating in the country — said they were planning to increase their social media marketing budgets this year, while 60% said they would particularly focus on social media influencers. Furthermore, 55% said they would focus on short video and livestreaming platforms.

While these platforms are attracting increasing attention from advertisers and the social media influencers with which they partner, the traffic metrics used on them have evolved, compared to more traditional platforms like China’s Twitter-like Weibo.

While on Weibo the number of followers an account had was the key determiner of its visibility, most of the new generation of video platforms use algorithm-based content distribution systems. These systems measure an account’s followers, but also prioritize content from accounts with more “weight,” which is based on a range of criteria that includes views and likes.

The greater an account’s weight, the greater its prominence and therefore the greater the genuine traffic the page receives.

Rapid artificial bloating of an account’s follower base through the usual deployment of “zombie accounts” can be detected by the platforms, which may lead to companies’ or influencers’ accounts being shut down.

So now, instead of creating zombie accounts, traffic-inflators are producing fake accounts able to more closely mimic a real user’s behavior. These next-level zombies boost an account by “watching,” liking and reposting its content, thereby giving its content greater prominence on the platform.

This greater sophistication comes at a price however. One creator of these fake accounts told Caixin that these “near-real followers” cost about 400 yuan ($57) per 1,000, compared to just 10 yuan per 10,000 zombie followers on Weibo.

A person who runs a social media advertising agency, which focuses on short video platforms and artificially inflates traffic, said that they can even rope in real humans to help nurture a company or influencer’s new account.

The advertiser told Caixin that they charge clients 50,000 yuan for an intensive three-week course. He runs six social media groups, each with over a 1,000 Douyin users, who he can call on to follow an account and like its content. For long-term clients, he charges 2 yuan for each follower he helps them acquire.