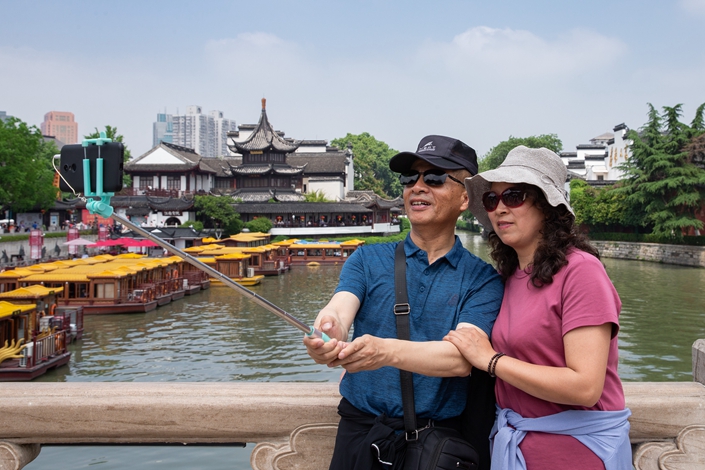 A tourist couple takes selfies on May 19 at a Confucius temple in Nanjing, capital of East China's Jiangsu province. Photo: IC Photo

Behind any part of the Chinese internet that relies on mass engagement, there lies a shadow ecosystem of vendors and buyers peddling fake content to drive traffic and make money.

Since the end of 2018, however, the company has turned a blind eye to user malpractice, allowing fake reviews and orders to proliferate, several business owners that use Mafengwo told Caixin.

Part of the problem is Mafengwo’s vendor ranking system, according to business owner Zhang Miao. Zhang claimed that Mafengwo marketing staff told him that during off-seasons, the site prioritizes merchants with higher conversion rates — a measure based on order volume divided by the total number of clicks — in order to generate more traffic.

This strategy has given rise to unfair competition between merchants, some of whom artificially inflate their conversion rates, another business owner, Li Zhongping, told Caixin. While fake orders account for around 10% of all orders on competitor site Feizhu, on Mafengwo it’s about 30%, he claimed.

This comes as the company prepares for a new round of fundraising in which it will try to convince investors that it has the potential to turn a profit.

Mafengwo announced in May that it would receive $250 million in investment from a group of investors led by internet giant Tencent Holdings Ltd., which would value the business at $2 billion. Caixin has learned that the two sides were in talks since the second half of 2018.

Responding to the allegations, a spokesperson for Mafengwo told Caixin that the company had upgraded its risk-control systems and capabilities several times this year, and regularly updates its protocols for controlling fake traffic on its website.

This is not the first time allegations of fake content have been lobbed at Mafengwo. In October, the company came under fire for allegedly using bots and hired writers to fabricate as much as 85% of the reviews that were supposedly posted by users. Mafengwo later responded that such reviews make up just 2.19% of its user-generated content, and the percentage of fake accounts among its total users is tiny.

Mafengwo Vice President Yu Zhuo told Caixin in October that allegations wouldn’t affect the company’s operations and that the firm expects to list on the Nasdaq in two to three years.