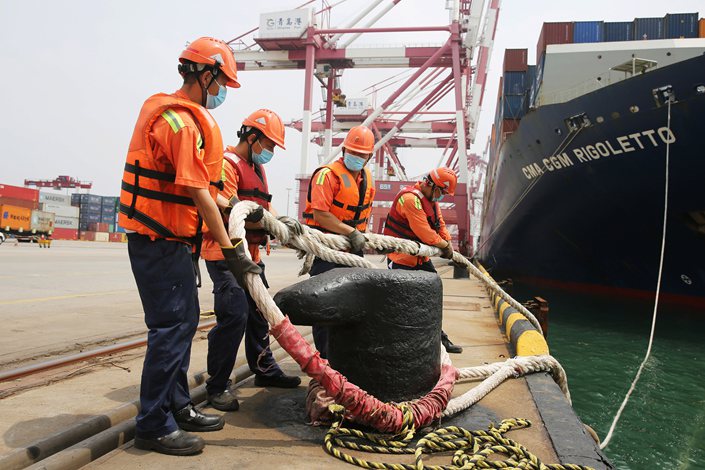 Workers unrope a container ship as it is about to leave port in Qingdao, East China's Shandong province, Sept. 9.

Two port workers in a coastal Chinese city have tested positive for the coronavirus after handling imported frozen seafood, heightening suspicions that aquatic products from overseas may be able to spread Covid-19.

Health officials in the eastern city of Qingdao confirmed in a statement Thursday that the two men in their 40s contracted the virus but were currently showing no symptoms of Covid-19. Some 3,500 follow-up tests on local residents had all come back negative, the statement added.

The cases emerged after one of China’s top doctors said earlier this week that the global coronavirus pandemic had reached “the darkness before the dawn” and urged the country to guard against a rise in so-called imported infections.

China confirmed eight new Covid-19 infections on Friday, all of which were imported, according to a statement (link in Chinese) by the National Health Commission. Authorities logged four new cases in the eastern city of Shanghai, two in the southern province of Guangdong, and one each in the southwestern province of Sichuan and the capital Beijing. A further suspected case was identified in Shanghai.

Also on Friday, health authorities in the northeastern province of Heilongjiang said that a 12-year-old boy surnamed Li, who was found to have an asymptomatic case of coronavirus after returning from the United States in July and subsequently discharged from hospital on Sept. 8, had tested positive for a second time after completing a two-week home quarantine upon his return to the city of Harbin. He has been transferred to a hospital for observation.

His case bears similarities to that of a 19-year-old man from the eastern city of Nanjing, who earlier this month tested positive for the virus despite previously returning two negative tests during a mandatory quarantine after entering China from the U.S.

Health authorities in Beijing said the capital’s new case was a person who initially tested positive for the virus on Saturday but did not previously show symptoms. China only includes people who show Covid-19 symptoms in official case tallies.

Earlier this week, Zhang Wenhong, director of the infectious diseases department at a major Shanghai hospital, said at a global meeting of Chinese doctors that “disease control around the world has probably reached the darkness before the dawn.”

Second waves of infections in countries worldwide mean that East Asian nations, which have done a comparatively better job of controlling the disease, are at increased risk of imported cases, he added.

“We might say things look extremely dark,” Zhang said. “But we can already see a glimmer of light. It’s just that nothing has yet happened to signal that the light (is growing stronger).”