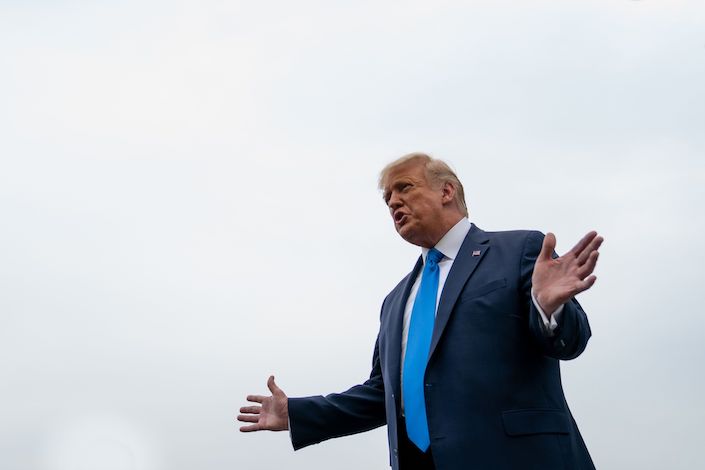 U.S. President Donald Trump speaks to members of the media on the South Lawn of the White House before boarding Marine One in Washington

U.S. Magistrate Judge Laurel Beeler issued the preliminary injunction this week at the behest of users who argued the prohibitions trampled the free-speech rights of millions of Chinese-speaking Americans. The app, which was supposed to disappear from American app stores Sunday, hosted 19 million regular users in the country and more than 1 billion worldwide.

WeChat has emerged as a top target in Trump’s crackdown on China ahead of the November elections. Tensions between Washington and Beijing escalated after his administration waged a campaign that’s also ensnared ByteDance Ltd. and its short-video service TikTok.

“The Court’s preliminary injunction permits the continued, unfettered use of WeChat, a mobile application that the Executive Branch has determined constitutes a threat to the national security and foreign policy of the United States,” government lawyers wrote in their filing. It would allow Beijing to “surveil the American people and collect and use vast swaths of personal and proprietary information from American users to advance its own interests.”

The U.S. says WeChat is a threat because Tencent is intertwined with the Chinese Communist Party, which can use the app to disseminate propaganda, track users and steal their data. It’s a similar argument Washington has used to force a sale of TikTok to American companies Oracle Corp. and Walmart Inc., a mega-deal now awaiting Trump and Beijing’s sign-offs. The companies and the Chinese government denied the allegations.l

This week, Chevron Corp. became one of the first major American corporations to enforce Trump’s executive order ban when it instructed employees worldwide to remove WeChat from work phones.

But the judge found that the government provided insufficient evidence of a security threat.

“While the government has established that China’s activities raise significant national security concerns — it has put in scant little evidence that its effective ban of WeChat for all U.S. users addresses those concerns,” Judge Beeler wrote.