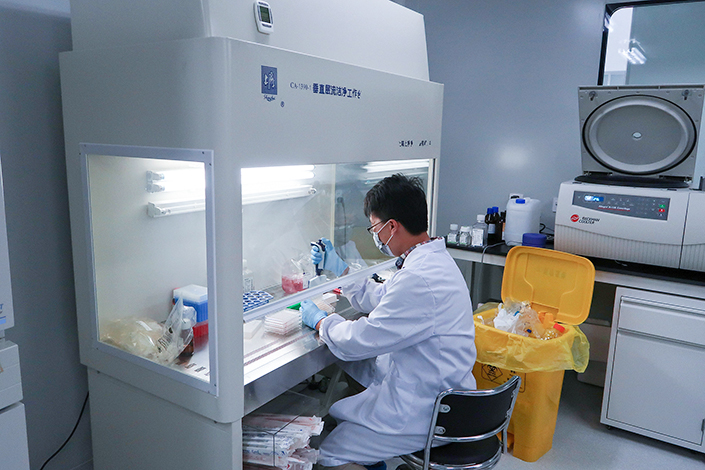 A scientist works in Zai Lab's drug development laboratory in Shanghai in October 2018.

The Shanghai-based company’s Hong Kong shares rose 5.57% Tuesday after recording an 8.54% jump on their debut.

Zai Lab is the first Nasdaq-listed biopharmaceutical company to complete a secondary listing in Hong Kong since the Asian financial hub changed its rules to allow the practice in 2018.

The company, which listed in New York in 2017, hopes to focus on patients in China and tap Asian investors’ interest in the health care sector, founder and CEO Du Ying said, describing the move as a natural transition. The company is considering a further listing on Shanghai’s tech-focused STAR Market, depending on the board’s requirements.

Despite a 464.7% surge in revenue in the first half, the company is on track for another profitless year, recording $129 million in losses in the period on $19.2 million of revenue. Last year, the company lost $195 million, widening from a $139 million loss in 2018.

Almost half the money it raised in its Hong Kong IPO will be earmarked for research and development (R&D), commercialization of its core products, funding clinical trials and registration filings of drugs in its pipeline, and a quarter will be invested in global licensing and collaborating, according to a company filing.

The company’s business model focuses mainly on in-licensed drugs, where it signs exclusive agreements with drug developers to further develop, test and commercialize their drugs in new jurisdictions. In return, Zai Lab gains royalty fees and other payments for meeting commercial milestones.

Under the in-licensing model, Zai Lab can get drugs to market more quickly and share the cost of development with another party. But investors may be concerned that acting as a kind of pharmaceutical middle-man could make the company vulnerable to competition.

Zai Lab has so far brought to market Zejula and Optune, both of which are cancer products it licensed from U.S.-based third-party drugmakers.

It is on course to in-license more innovative drugs, according to Senior Vice President Wang Chong, who stressed the drugs would be either first-in-class or best-in-class.

The secondary listing follows plummeting bilateral relations between Beijing and Washington, and increased scrutiny of U.S.-listed Chinese companies in the wake of the fraud scandal at former Nasdaq high-flyer Luckin Coffee.

A group of U.S. regulators said last month that stock exchanges should set new rules that could trigger the delisting of Chinese companies, citing concerns that investors are being exposed to frauds.