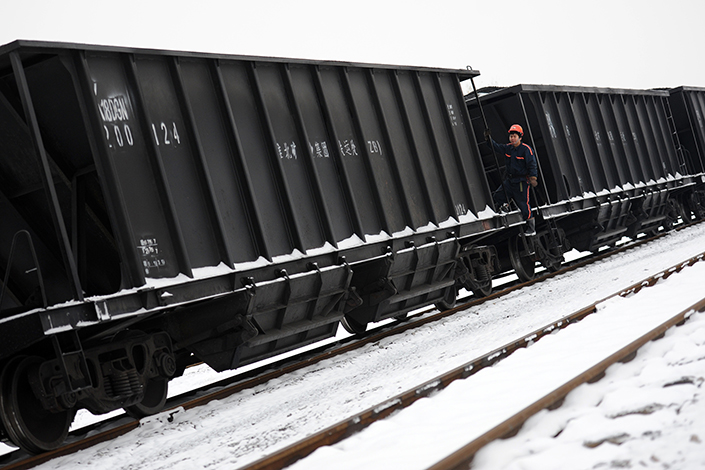 A worker checks a train laden with coal in November 2016 in Huaibei, East China’s Anhui province.

With shrinking domestic coal production capacity following supply-side reform, China’s northeast is likely to experience the most severe shortfall in coal supply for the looming winter heating season since 2016.

Zhang Feilong, a coal analyst with YiMei Net, told Caixin that the region — comprising the provinces of Heilongjiang, Jilin and Liaoning — could face a 30 million ton shortage of the combustible black rock through next year’s spring.

If the estimate is close to reality, it would mean the biggest supply gap since the country kicked off a supply-side reform that called for consolidation of outdated coal production capacity in 2016.

Other experts familiar with Jilin’s coal industry expect the province alone to have a 12 million ton supply shortfall.

The strain on coal supplies is a result of reforms the Chinese government introduced to stimulate a slowing economy by upgrading the industry’s structure.

The sweeping shutdown of unlicensed or outdated coal mines across the country has resulted in a decline of 6.67% to 59.3 million tons in the northeast region’s output in the first eight months of 2020 compared with the same period last year, provincial data showed.

And neighboring Inner Mongolia autonomous region, a major coal supplier to the northeast provinces, saw its capacity drop by 5.89% year-on-year to 634 million tons in the same period, according to the local statistics bureau. The consolidation also shut down coal mines and cut capacity by some 13 million tons per year in the autonomous region’s Ordos which produces more coal than any other city in China.

In response to the waning output at home, the country’s coal imports picked up by 0.2% year-on-year in the January to August period to 220 million tons, according to data from the National Bu-reau of Statistics.

But whether the upward trend can last still remains in doubt, as China doesn’t seem to be considering loosening import restrictions on coal from Russia, a major source capable of replenishing supplies to Northeast China, an analyst familiar with the matter told Caixin.

And imports of the commodity from Australia, one of the biggest suppliers to China, plummeted by 42% year-on-year in July amid the escalating tension between Beijing and Canberra.

Authorities in the northeast have turned to the more remote eastern part of Inner Mongolia for their supplies. Railway data showed an additional 1 million tons of coal are being freighted in compared with previous years.

The Heilongjiang branch of China Huadian Corp., one of the top five power generators in China, is in talks with coal enterprises in Russia’s Sakha Republic, the government website showed.