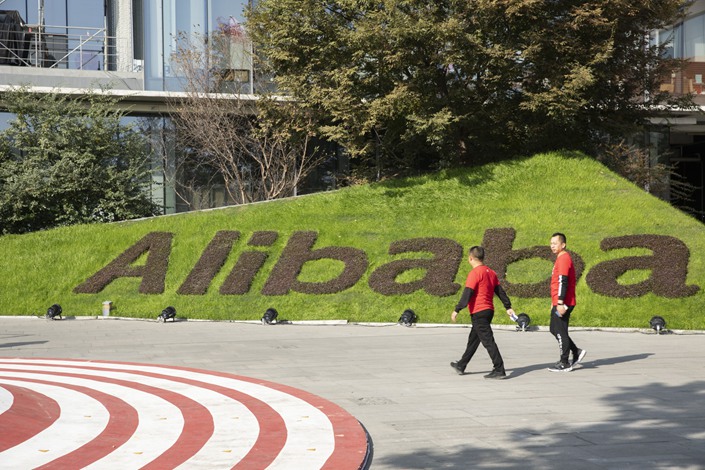 (Bloomberg) — Alibaba Group Holding Ltd. foresees its cloud services arm turning profitable for the first time this year, a milestone for the decade-old business that underscores how Asia’s largest corporation expects a return to pre-pandemic levels as China’s economy rebounds.

Alibaba’s shares rose as much as 4% in Hong Kong, their biggest intraday gain in over a month. Its internet computing business is growing roughly 60% at an annual revenue run rate of about $7 billion, Chief Financial Officer Maggie Wu told investors at an annual company conference. The unit should turn profitable in the year ending March, she said.

Cainiao, the logistics service Alibaba folded fully into its broader empire in 2017, should generate positive cash-flow on an operating basis over the same period, she added.

China’s most valuable corporation has invested billions in hosting computing for corporations over the cloud, while building a nationwide logistics network that can handle the billions of parcels its e-commerce business throws out. Achieving profitability will boost Alibaba as it tries to revitalize growth alongside a recovery in the broader Chinese economy. The e-commerce giant is riding a pick-up in consumer spending — particularly online — in a country among the first to recover from Covid-19.

“We typically spend 8 to 10 years incubating, nurturing and growing a new business,” Chief Executive Officer Daniel Zhang told investors. “We still regard ourselves to be in the nascent stage of the global cloud era.”

Like Amazon.com Inc.’s, Alibaba’s cloud service emerged from the computational power needed to handle billions of online shopping transactions to become one of its fastest-growing initiatives. The Chinese company today relies on the service, which competes globally with Amazon Web Services, Microsoft Corp. and Google, to underpin both its global expansion and forays into newer arenas such as livestreaming.

Alibaba’s cloud business continued to grow during the global Covid-19 shutdowns this year. It held a leading 40.1% share of China’s total cloud infrastructure services spending in the June quarter, more than double its closest competitors, according to industry researcher Canalys. Even as economies start to recover, the company is aiming to take advantage of the shift to upgrade more corporate IT infrastructures to the cloud and boost cloud-based collaboration at work, Zhang told investors Wednesday.

Retail sales in the world’s No. 2 economy rose for the first time this year in August, after virus restrictions eased. The comeback in consumer spending has allowed Alibaba to further expand a $700 billion empire that already spans online retail, food delivery and internet computing. It owns a third of Ant Group, the Chinese financial titan pursuing potentially the world’s largest initial public offering, and most recently outlined plans to create a new line of business by modernizing factories.

Excluding its stake in Ant, Alibaba’s strategic investments are currently valued at $45 billion, Wu told investors on Wednesday, adding that the company will continue to invest in technology and research. Alibaba last year reported an $83 billion stake in its global portfolio of investments, which included its 33% stake in the fintech behemoth.

Zhang — credited with orchestrating Alibaba’s last big foray into a new arena, with a move into brick-and-mortar retail — is responding in part to intensifying competition on multiple fronts. Pinduoduo Inc. has lured small-town buyers away with cheaper bargains, while traditional foe JD.com Inc. has ventured beyond its traditional strength in consumer electronics into groceries, a category that leapt to the fore during nationwide lockdowns.

Even social media companies like ByteDance Ltd. and Tencent Holdings Ltd. are increasingly reaching out to shoppers through livestreaming — a route Alibaba pioneered with Taobao Live — after Covid-19 fueled online entertainment. While rival video apps like Tencent-backed Kuaishou and ByteDance’s Douyin typically directed traffic to Alibaba platforms, they’re now seeking to handle the transactions by themselves.

Then there’s sustained competition in food delivery. Alibaba’s Ele.me now directs flowers, housekeepers and masseurs to doorsteps in addition to lunchboxes, while Tencent-backed Meituan Dianping tries its hand on beauty products and smartphones.

With more than 1 billion annual active consumers, Alibaba generated over $1 trillion in gross merchandise value in the 12 months ended June, Wu said. Spending on its platforms accounted for about 18% of China’s total retail sales, up from about 10% in 2015.

“Domestic consumption, cloud computing and data intelligence, and globalization — these are the three growth engines for Alibaba’s future,” Zhang said. “Digitalization is the biggest opportunity of our time.”