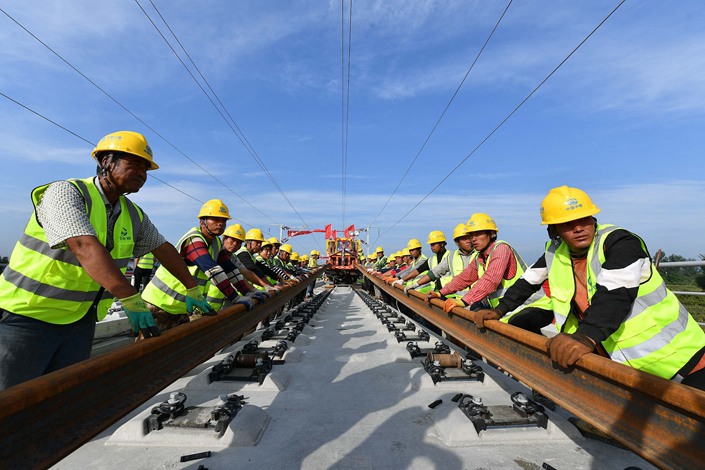 A crew works on a section of the Beijing-Harbin high-speed railway line in Beijing on Sept. 5.

China’s railway operator has identified three lines to include in a national pilot program involving real estate investment trusts (REITs) for infrastructure projects, a top executive revealed, providing the company with yet another tool to lighten its heavy debt load.

One of the three lines connects the southern cities of Guangzhou and Zhuhai in affluent Guangdong province, Huang Min, vice president at China State Railway Group Co. Ltd. (China Railway) said at a forum on Sunday, marking one of the first public disclosures by a top company official since the program was first announced in April.

The second line will be a stretch in Central China’s Hubei province for the route connecting Shanghai to the interior city of Chengdu. The third will involve a ferry service connecting Guangdong with the neighboring island province of Hainan.

The April notice from China’s securities regulator and state planner discussed the development of REITs under a pilot program, with infrastructure-related REITs marked as one of the first focus areas. REITs date back as early as the 1950s in the U.S., and use a corporate or trust structure to raise money that is then used for the ownership and management of real estate-based assets, with profits delivered as dividends to stakeholders.

More broadly, the category is just the latest financial tool being given to China Railway as it seeks to make its massive debt-load more sustainable since being spun off from the government’s former rail ministry back in 2013. Among other things, the operator has spun off some of its better-performing assets for public listings and financed projects under “public-private partnership” (PPP) programs, in addition to traditional bond sales.

Much of China Railway’s debt was racked up over the last decade as it built a state-of-the-art high-speed rail network, spending hundreds of billions of dollars on tens of thousands of kilometers of track, trains and other equipment.

Traditional fundraising for many infrastructure projects entails a 3-to-7 ratio of money from investors and bank loans, respectively, said Xu Bing, an analyst at UBS. REITs typically come in and take over the bank loan financing, he said. That model allows individual investors to buy into China’s railway system through the REITs, while also allowing the rail operator to lower its debt ratios.

In the past individual investors could only buy into China’s railway network by purchasing the operator’s bonds or publicly traded stock of related companies. The public listing route was limited because most of the operator’s rail assets failed to meet stock exchange profitability requirements. Only three such entities are listed today, including the Beijing-Shanghai high-speed rail line; a line popular with freight haulers connecting the Northeastern city of Daqing with Qinhuangdao port; and a highly traveled line connecting the southern cities of Guangzhou and Shenzhen.

Investors like REITs for their steady cash flow, which typically comes from tenants of the real estate owned and managed by the REIT. While such investment vehicles may not initially be profitable, they can often turn profitable later with good management and then pass on their profits as dividends to investors.

The three rail lines in the program were formed between 2003 and 2012, fulfilling a requirement that all assets must have been operating for at least three years. In addition, such assets must all have stable cash flow and strong growth potential.

China Railway has yet to disclose financials for the three lines in the pilot program. But materials related to the Guangzhou-Zhuhai line show it earned a profit of 74.3 million yuan ($10.9 million) in 2019, marking its first annual profit. Its net cash flow for that year was 936 million yuan.

Despite the program’s potential to relieve China Railway’s debt by bringing in outside investors, the overall potential for REITs in the operator’s network is relatively small, UBS’ Xu pointed out. He said the broader profit potential for rail assets is relatively weak compared with the country’s even vaster network of toll highways built over the last two decades. He added it will also be hard to find many suitable rail lines that will meet the program’s requirements.

Investors may also be turned off by the high degree of regulation of ticket prices, said Shen Yan of Ernst & Young. Other analysts said investors could also be turned off by the heavy reliance of such REITs on a single tenant and revenue source, namely the rail operator. REITs in other markets also typically receive favorable tax treatment, though China has yet to clarify whether the latest program will receive such treatment.