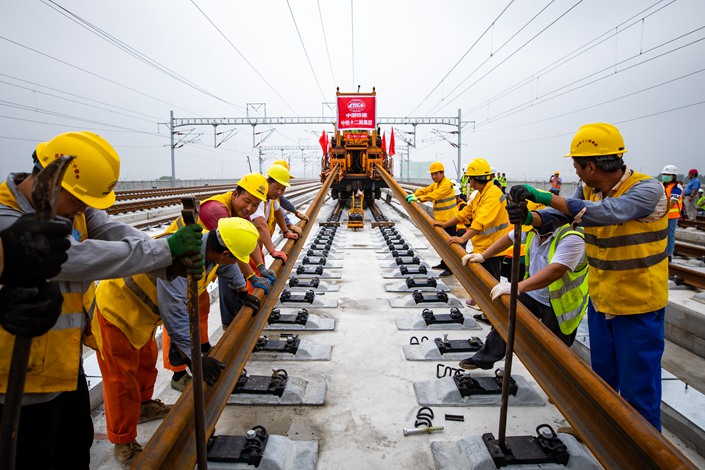 A row is brewing between China State Railway Group Co. Ltd. (China Railway), operator of the world’s largest high-speed railway network, and some of the shareholders of its development fund over the group’s plan to liquidate the entity nine years early to avoid paying costly dividends as bond yields slump and profits collapse.

Slowing economic growth and the coronavirus pandemic pushed market interest rates lower in the first quarter and left China Railway paying a fixed dividend yield to the insurance companies of 5.32% at a time when its 20-year AAA-rated bonds were yielding below 4%. That’s an attractive return for the insurers, who between them own 17.86% of the total shares in the Railway Development Fund (RDF). But it’s an unwelcome burden for China Railway — the group reported a record loss of 61.4 billion yuan ($8.9 billion) in the first quarter of 2020 as passenger trips crashed 54.8% year-on-year.

The disagreement between China Railway and the five insurance companies highlights a dilemma faced by the country’s financial institutions. On the one hand, they need to heed calls made by the government on financial institutions to sacrifice their revenue to lower financing costs for business and help support the economy. But on the other hand, financial institutions also need to protect their own interests and those of their investors and secure the highest returns possible on their assets.

The RDF was set up in 2014 to raise money to fund construction of the country’s high-speed rail network at a time when the authorities were boosting infrastructure investment to drive economic growth. But railway construction projects were not attractive to investors because of their low profitability and to entice investors, China Railway offered early-bird sign-ups preferred shares with steady returns. The four banks that first invested in the fund when it was launched in 2014 were offered a fixed annual return of 5.5%, and the insurance companies that bought shares later were promised 5.32%.

But the fund was launched almost at the peak of the interest-rate cycle and money market interest rates started to fall as did the cost of selling bonds, making the cost of financing the preferred shares increasingly expensive. In 2014, the coupon on nine bonds issued by China Railway ranged from 4.53% to 5.78% but in 2020, rates on the two 20-year bonds it issued were only 3.93% and 3.97%.

In the first quarter of 2020, bond yields fell further as economic growth slumped due to the coronavirus — the yield on the benchmark 10-year Chinese government bond fell to the lowest since 2002 and yields on 20-year bonds of China Railway in the secondary market dropped to under 3.9%.

The performance of the RDF has also been unsatisfactory — many rail routes the company invested in are still ramping up capacity or are not yet open. Financial data show that the net profit of the China Railway unit that operates the fund was just 1 million yuan in 2018 and it swung to a net loss of 2.7 billion yuan in the first half of 2019.

As the state-owned group was able to raise funds through the bond market at much lower cost than it was paying its preferred shareholders, it put forward a plan to buy back the shares earlier than their 2029 maturity, even though the terms of the issuance did not give it the right to do so, a source in the insurance industry familiar with the matter told Caixin. However, the insurers rejected the proposal and the two sides are now in a stalemate. A source close to China Railway told Caixin the company is preparing a new plan and may ask the relevant authorities to step in and push forward the liquidation of the RDF.

“If (the fund) is liquidated, it is equal to repaying an old bond and issuing a new bond at a lower price,” a source with Ping An Insurance (Group) Company of China Ltd., one of the investors in the fund, told Caixin. China Railway’s conduct is against the spirit of the contract and would set a bad example for other companies who might be tempted to do something similar to avoid paying investors their promised returns, the source said.

When insurance companies invest in long-term projects they have to match those assets with their liabilities. Liquidating the fund and forcing investors to give up their assets means insurers would have to rematch their assets and liabilities, which could expose them to risks and damage policyholders’ interests, an insurance industry source said.

But for its part, China Railway could claim that it’s justified in buying back the preferred shares on the grounds that financial institutions should respond to the government’s call to sacrifice their revenue to support the real economy, a source close to the group told Caixin.

“You can’t blame China Railway for trying to save costs, and the authorities have called on financial institutions to sacrifice their revenue,” a source with one of the financial regulators told Caixin. “But in this case, this would appear to be a violation of their contract and redeeming the shares in advance is indeed contrary to the spirit of their agreement.”

A previous version of this story incorrectly identified the class of shares that insurers own in the RDF. They own 17.86% of the total shares.

A previous version of this story confused revenue and profit for financial institutions.