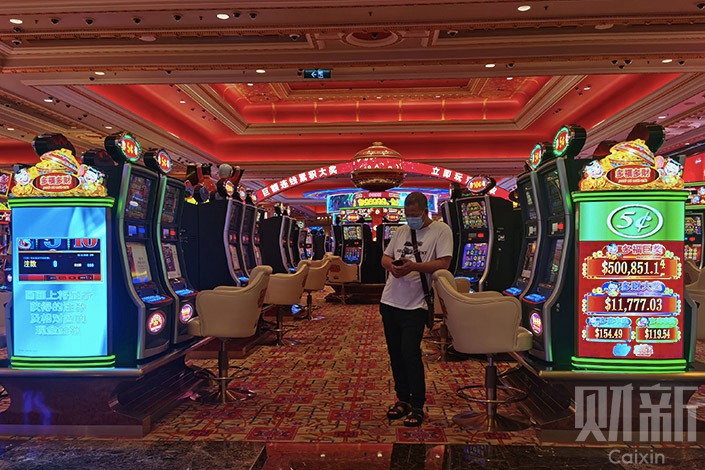 A customer wearing a mask checks his phone on Sept. 11 at a gambling hall in Macao. Photo: Liang Yingfei/Caixin

Macao, the world’s foremost gambling hub, is struggling to recover from the fallout of the Covid-19 pandemic, despite travel restrictions easing over the past month.

As the only part of China in which gambling is legal, mainland visitors are Macao’s lifeblood. During peak periods, as many as 500 gambling halls are open for business. However, only a fifth were running by the middle of September, an insider told Caixin.

Travel restrictions to curb the spread of the novel coronavirus barred tourists from visiting the gambling hub for nearly eight months, ravaging its economy. On a normal September day, the gambling hub had thousands of empty baccarat tables and only a few dealers standing around.

Over the past three decades, Ming experienced the ups and downs of the gambling market, including the most thriving time when Macao emerged as a top gambling destination in the 1980s.

“I will probably never see a boom like in the golden years again,” Ming said, explaining that customers had begun to withdraw money from their VIP halls as they fear a wider collapse of the region’s economy.

Macao’s gambling revenue from January through August plunged 81.6% year-on-year to 36.4 billion patacas ($4.5 billion). The total number of inbound tourists was 3.6 million over the same period, down 87% year-on year.

Since Sept. 23, mainland residents have been allowed to apply for travel permits to Macao as the region’s outbreak has been brought under control.

With an eight-day holiday for China’s National Day approaching, it is expected that the so-called “Golden Week” will bring a boost to Macao, even though the most optimistic outcome might be half of last year’s numbers, according to analysts in the industry.