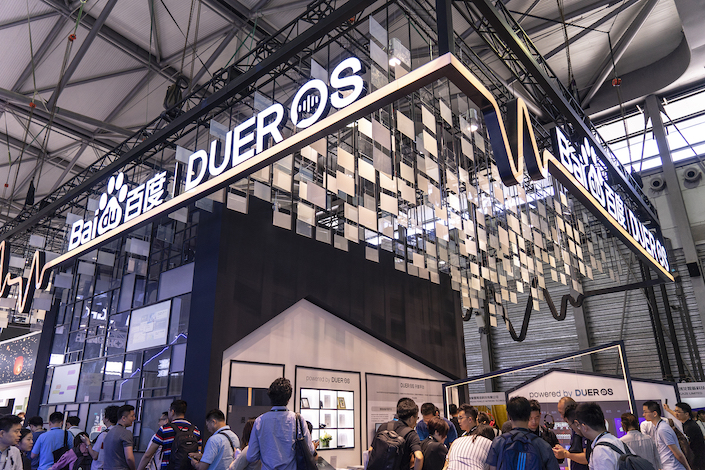 China’s Baidu Inc. raised nearly 2 billion yuan ($293 million) for its Smart Living business division, which focuses on voice assistants and smart devices, as the search engine giant moves to spin off the unit for a future listing.

Baidu signed an agreement for an independent funding round for its Smart Living Group that valued the unit at about 20 billion yuan ($2.9 billion), the company said Wednesday. Investors include Baidu’s own investment arm Baidu Capital, Citic Private Equity and IDG Capital. Transactions are set to be completed by the end of the year, and Baidu will maintain absolute control of the unit after the investment, Baidu said.

Baidu didn’t disclose the amount of money raised. Separate sources told Caixin that it amounted to around 2 billion yuan, of which Baidu contributed nearly half.

The funding round marked a step for Baidu to split off the Smart Living unit for a separate listing on the mainland market, sources said.

“This transaction marks another milestone for Baidu to incubate new businesses with its leading technologies and strong synergies from Baidu Core to capture large market opportunities,” Robin Li, Baidu’s chairman and CEO, said in a statement.

Baidu debuted the Smart Living Group in 2018 to develop its AI-powered voice assistant platform DuerOS, similar to Amazon’s Alexa, and smart devices powered by the system such as speakers and wireless earphones. The company is counting on the business to boost its competitive edge in artificial intelligence and extend its reach with users.

Voice control system-powered smart speakers are becoming the new darlings of tech companies as they race into the AI era. The smart-speaker craze was ignited by the 2014 debut of Amazon’s Echo, supported by the Alexa voice control system and responding to users’ verbal orders to play music, read news, report the weather and provide a variety of other services.

Baidu since 2018 has launched several versions of smart speakers under the brand Xiaodu, which become a main player in China’s burgeoning smart-speaker market.

Baidu spent heavily to subsidize smart-speaker products to compete with those from rivals Alibaba Group and Xiaomi Corp. An industry executive said the huge subsidy and marketing spending of the division is one factor pushing Baidu to spin it off. The next step is to seek a public listing for the business, the executive said.