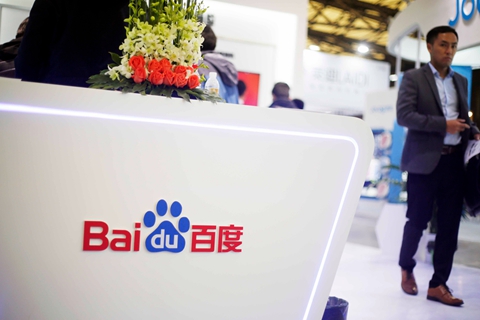 The reshuffle reflects Baidu’s attempt to expand from software development to smart-device production, as it pushes ahead its AI-focused business strategy, sources close to the company said.

Last year, the search-engine operator began repositioning its business focus to emerging sectors including AI, cloud computing and automatic driving. It has partnered with a number of companies to roll out smart devices powered by its DuerOS system, such as smart speakers, displays, televisions and refrigerators.

According to Baidu, as of January, the number of activated smart devices equipped with DuerOS exceeded 50 million.

Baidu has been reshuffling its resources to support its AI ambitions, especially since Lu, a former Microsoft vice president, took the helm as Baidu’s COO in January 2017. In March of last year, Baidu set up the Intelligent Driving Group by consolidating its automatic driving research assets. It also set up the AI Group to lead AI technology development.

The business transition is paying off. In the fourth quarter of last year, Baidu reported 29% year-on-year growth in revenue to 23.6 billion yuan ($3.7 billion). The company attributed the solid revenue growth to strong performance of its mobile and AI businesses, according to Baidu’s earning report.

Analysts said the push by tech majors into smart devices such as speakers is a key step toward getting market share for their voice-based AI systems, which are expected to become a ubiquitous part of daily life and the hub linking all kinds of devices and home appliances.